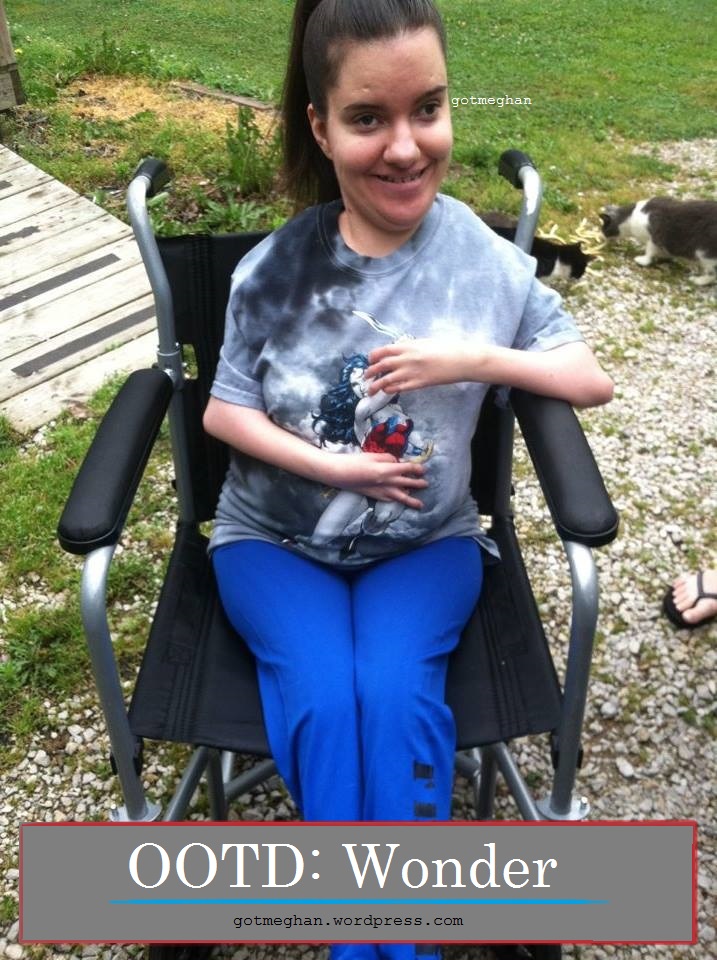 Today is the day that the new Wonder Woman movie comes out starring Gal Gadot, Chris Pine, Robin Wright, and Connie Nielsen! This post is not sponsored, I just bought a new WW shirt and decided to publish the outfit post because it felt right!

This will also my second DC superhero T-shirt that I have in my closet after the Batman shirt that my mom swore was apart of Marvel – you should have seen her face when I told her that Wonder Woman wasn’t part of it either! Anyways, I bought it when I got the other shirt at Walmart; I don’t remember if I had mentioned it in my last post that I found both of the shirts in the men’s section because half the time when I purchase tops they don’t fall off my shoulders! The necklines are so nice to me!

The shirt is mostly in different shades of gray, but has a comic version of Wonder Woman on the front. She’s located right in the middle of the shirt, she’s basically the only colored part of my shirt. She has her red and gold colors that everybody is familiar with. My mom made the comment as soon as I looked down on my arms, “well, one hand is covering up her face and the other has her hoochie!” Thankfully whenever I move my arm over on the armrest you can actually see her face, which makes me feel better! I can’t do much about the arm because it’s too low!

Now my pants are a pair of leggings I found on accident, they weren’t located in the regular section. They were in the middle of the walk way between the little boys and shoe sections! Out of all the leggings there, I only grabbed one because we were worried that they didn’t wash well, it was too strange for them to be there so my mom and I were having a hard time taking them seriously! Anyways, they’re a nice solid blue, on the left sleeve there is the word “Fearless” in caps and I always want to wear them with my superhero shirts and I think this one works well with them!

The cats in the background are eating leftover french fries and in the last picture, that was my sister’s arm on the side!

What do you think of this outfit? Yay or nay? Are you going to see Wonder Woman this weekend? 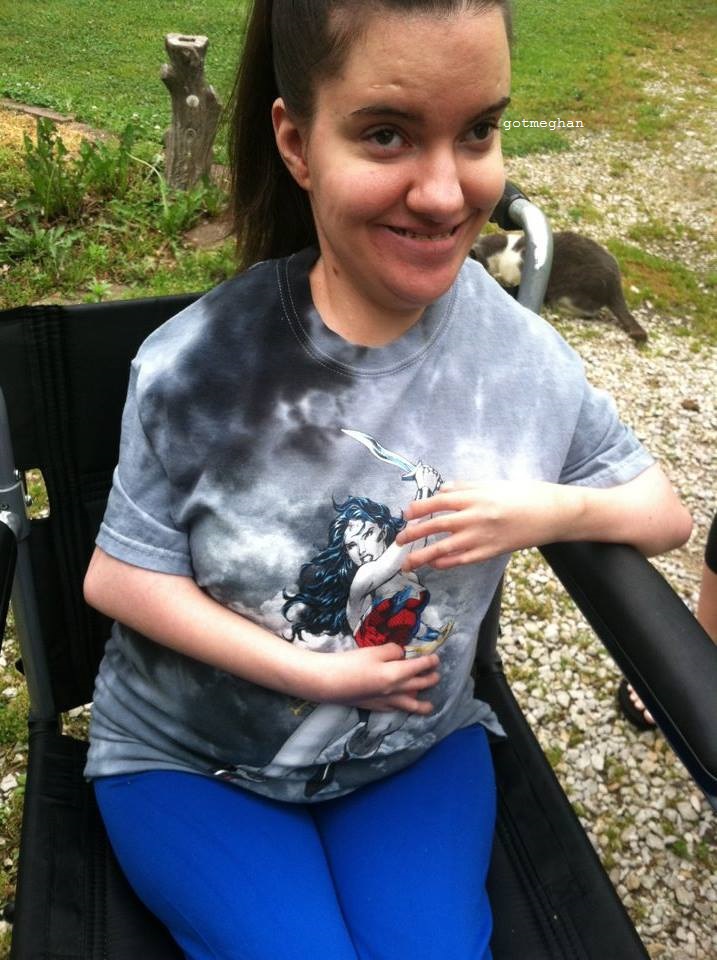 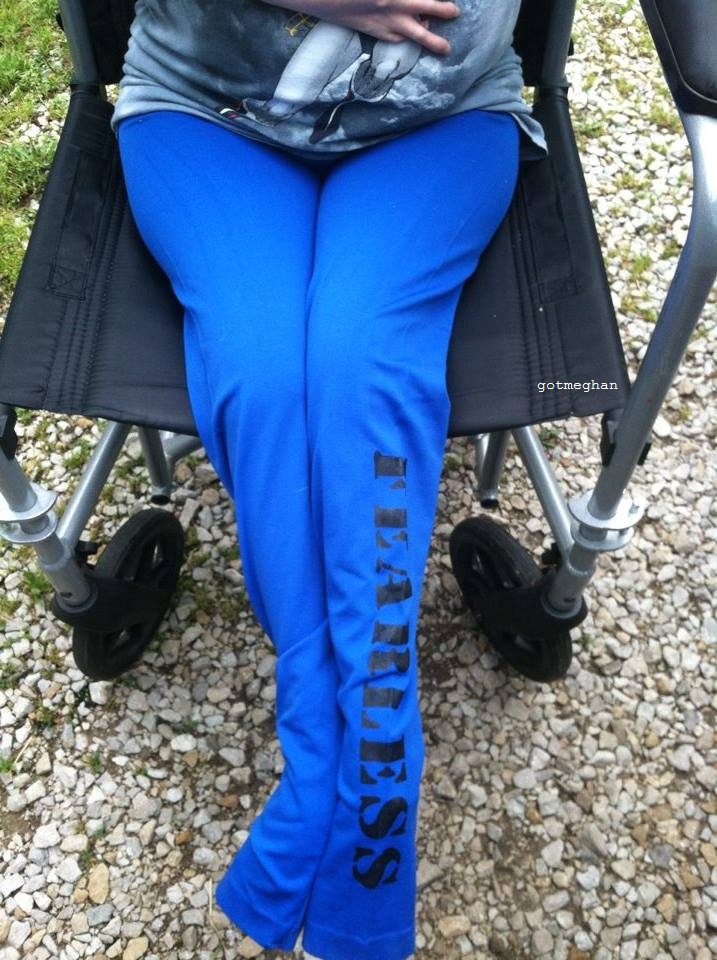 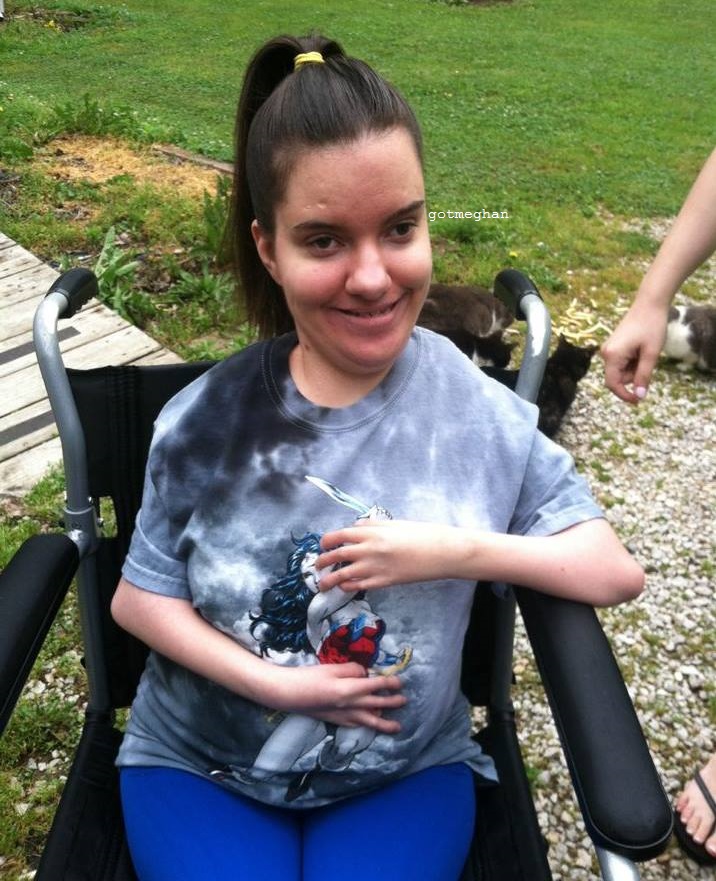 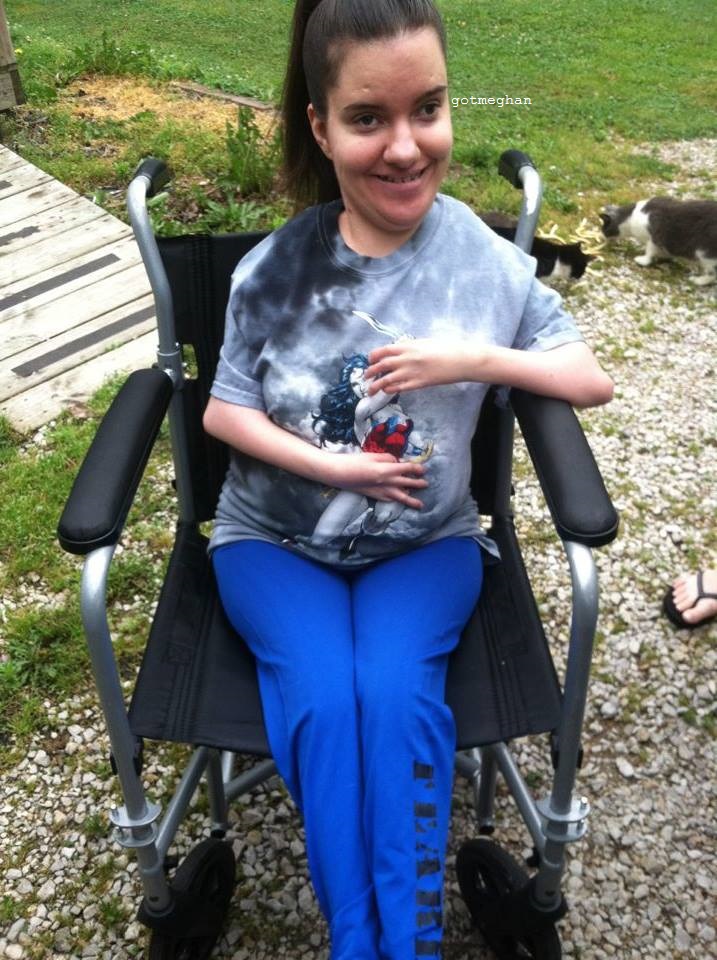 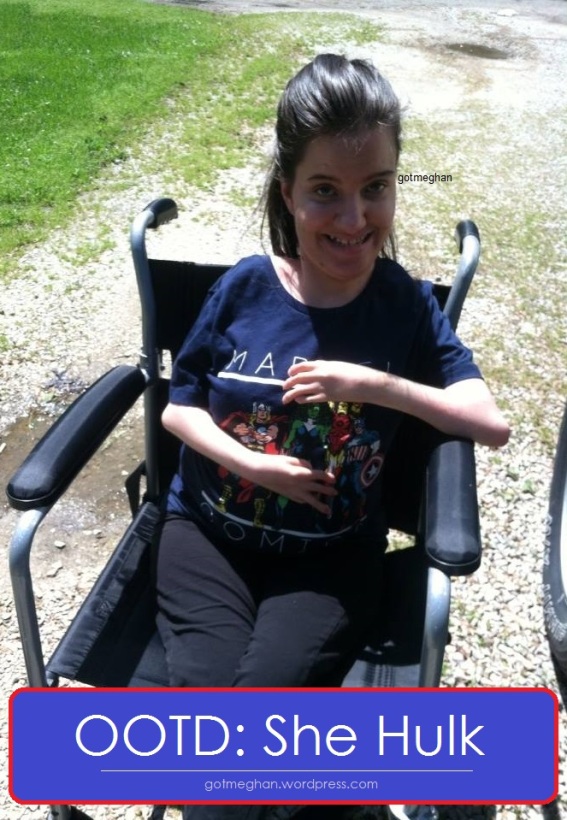 So I’m back with my first spring/summer OOTD post! I’ve seriously missed doing these but they are so last minute that my mom or dad will get me out of the car quickly and we tend to forget to take pictures.

Anyways, I have to say my whole Marvel comics obsession this is my third top! My mom got this for me last week when she was out at Wal-Mart and after when I told her about what I thought when I opened my Batman shirt present at Christmas. She seriously thought Batman and Cap were in the same comics. She looked at me like so it’s not from Marvel? No, mama. He and Supergirl are from DC! So this was her surprise for me the next day when she came from work!

I love it but for a weird reason, I have a shirt that has She Hulk aka Jennifer Walters on it! I don’t know much about her but I knew her well enough to pick her out of this lineup and wonder the hell they didn’t just put Bruce instead since you can clearly see Iron Man, Captain America, and Thor! Is she in the Avengers? Another thing I like is that the whole design is large enough were you can see everything, even with my hands in the way. It isn’t black either! It’s navy blue!

As for my pants, you guys know about because I tend to wear them a lot in these posts. I need to go through my bottoms and see what really goes with this shirt besides these, because I do love the pants a lot, but since I wear them so much I’m afraid I’ll want to hide them somewhere where my mom can’t find them! By the way, that’s Bootsie at the last photo, she has a problem with photo bombing! For something special, my mom let me borrow her clip and I had my hair slightly up while at nana’s and I only “stabbed” myself seven times trying to rest my head!

So what do you think of my new outfit? Yay or nay? Who is your favorite superhero? 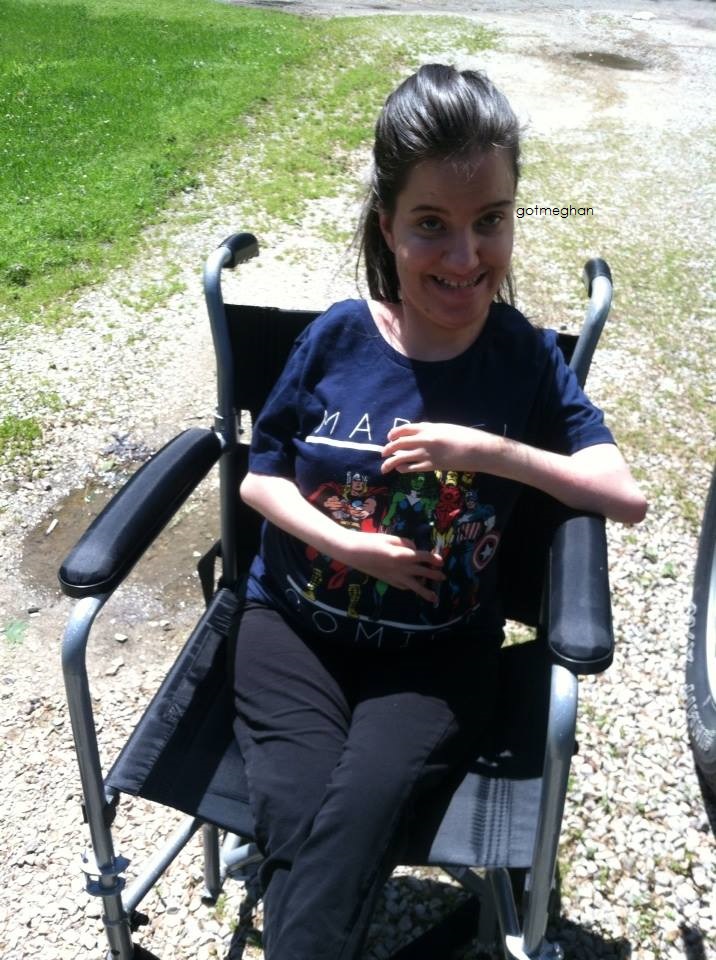 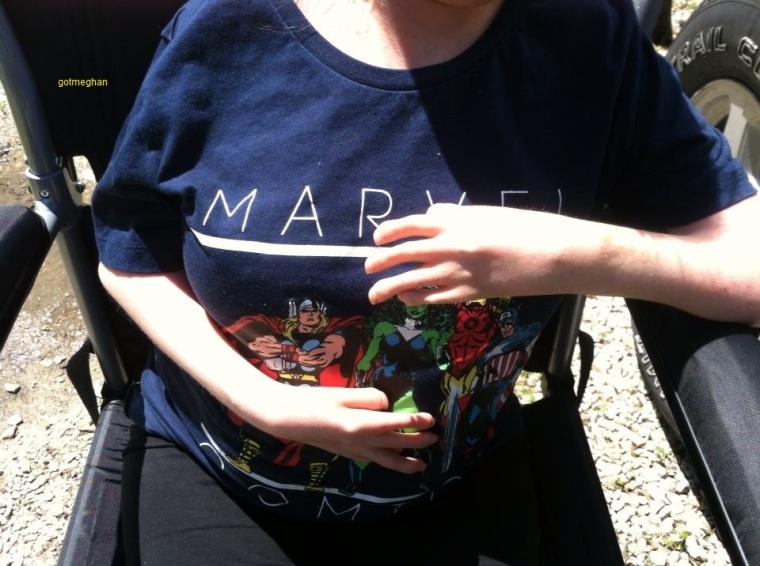 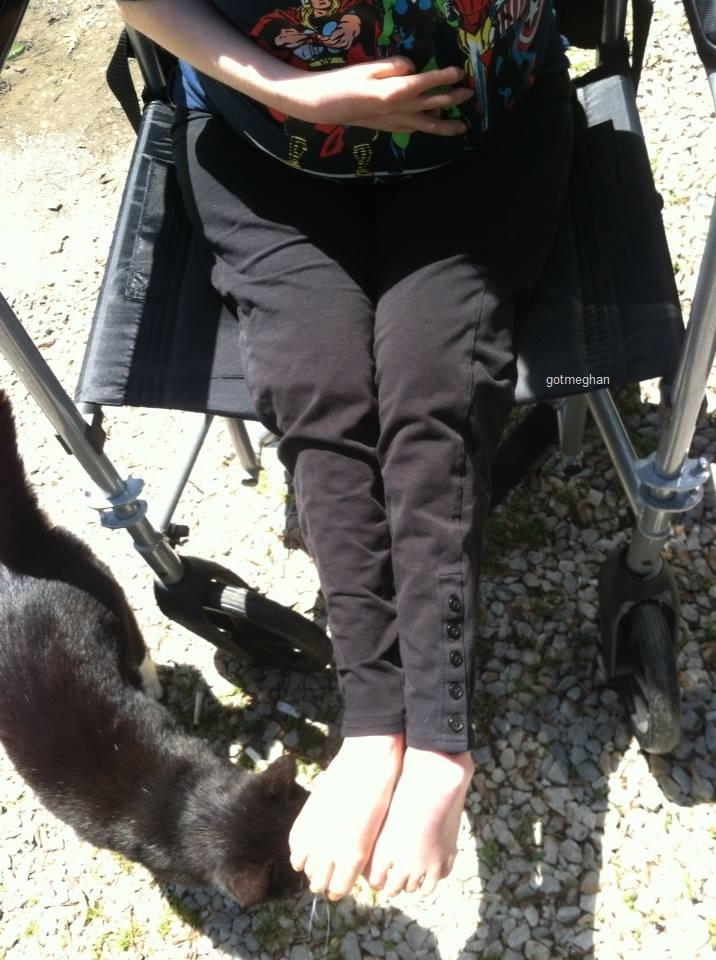