So I wasn’t going to even blog today, but I thought this was a special occasion. I needed to do something nice for my sister’s big day!

Today my little sister turns 21! We can both drink together! However I was told that she can’t exactly drink with her medication she’s on right now. So that part kind of sucks.  There are other ways to celebrate birthdays without alcohol. I guess, I could get a tub of chocolate ice cream? Or we could watch the High School Musical Reunion together, but I’m kind of running out of things to do with her!

It’s kind of difficult to talk about how much my sister means to me. Mostly because she sort of puts up this emotionless wall like I do. We’d rather not feel any kind of emotions. Anyways, I do remember when I was a freshman (and I hope I haven’t talked about this on here!) I took P.E. and I couldn’t do some of the activities that the other students could do, so I would borrow one of the other girls to do an activity with me instead. Some of these girls hated whenever I picked them because they would show it “silently” on their faces. Anyways one of these girls got on the subject of our siblings, and I started talking about Blondie. At this time, she was still in elementary school and I was basically bragging about her, how awesome she was when we were kids; what she does when somebody stares too much at me and all that. I wish I could remember how we ended our conversation.

I love you so much Blondie and I’m happy to be your big sister! 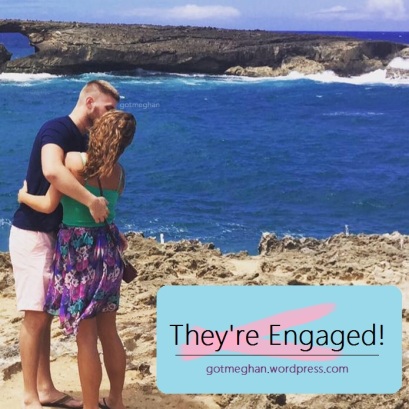 Sorry I couldn’t hold it much longer. I’m lucky I got through four days with only telling one person! I wasn’t originally going to include it in the same post either, but I didn’t want to wait for two weeks for an open spot!

Yeah, you read that picture right!

I got this random text message from her saying “so Brandon and I are engaged!! Don’t tell dad” Monday night. They were supposed to come down the night before, but dad was mad at her about a gift that she got early, no she’s not pregnant! I’ll explain in a couple of days I promise! Anyways, I kept my end of the deal and kept my mouth shut even though it was all over Facebook and she has quite a few of his friends on it. We’re all surprised nobody told him after seeing that status!

They wanted dad’s blessing! My dad didn’t know that was the reason they were coming down, so dad had him fix a few things on my TV. According to dad, the dude looked like he was going to have a nervous breakdown! He did give his blessing though, because I somewhat heard it and I immediately texted my sister because she and mom went over to drop off food for my nana and papaw or something. I told her “He asked, so far so good!” I don’t know which one I was more proud of, because that’s a big thing for both of them!

I did pretty good as far as handling emotions. That is, until my mom went and babbled that she was going to ask me to be her maid of honor. Now I got told not to tell our dad that he had already purposed and she sent that text out to both mom and I, and mom still babbled to me about this maid of honor stuff because “she couldn’t help herself, it was too exciting!” I’m still a bit weirded out mostly because she could have her close friends have this and she chose me. I know it’s an important role, but still I just don’t think I’m cut out for the job just because I’m the sister. I don’t know, it’s only been four days and I could like it instead of being the bridezella. Like my mom said, I get to plan the bridal shower! 😉

She already has a color theme: gray and pink. Our dad can wear a dorag (bandana) on his head as long as it’s in one of those colors! He’s already allowed to bring his motorcycle too! I’m comfortable with wearing a dress, but we’re going to have some serious chats about how pink these bridesmaid dresses will be, because I hate the color pink! They’ve even decided on a date sometime in October 2017! If you have advice to the happy couple and/or have any comforting words for me and my insecurities, I could use them too! Thanks!