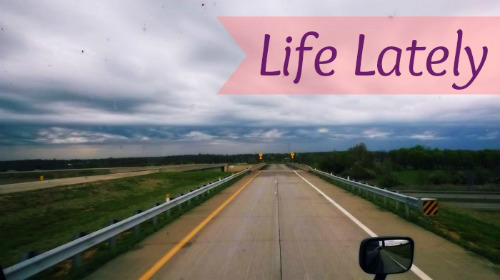 So it’s been a while since I’ve done a proper “Life Lately” post.

While I did Blogmas in December, I didn’t feel the need to do one for that month as I was posting a lot of things I was doing with my family, so I didn’t have anything else to share.

It’s finally January and I’ve seen a lot of people having mixed feelings about it. Which is completely understandable as last January for me was awful! I also don’t want to say that this January has been the best month, because I know with everything else going on in my life, it could change in a second. I will say, it’s been a nice switch. If anybody saw my tweets from last Thursday’s #USBloggerChat on Twitter, Jenn, Jasmine and I had a nice girly chat about what we hope 2016 will be for us. I said that I’ve had some really good opportunities come to me and it’s been a really good distraction, but I’ve also haven’t kicked my laziness either!

I struggle with multitasking. In the mist of accepting these different things; I say that as though I have like 10, but I don’t it’s like two! I hoped my whole body, including my brain would work properly. I have been lounging around and I absolutely hate it because this is not professional. I don’t have a normal job, all I have is my blog. I use it to share my thoughts and stories with other people around the world, but when I decide to take things to the next level, whether it’s a small step or not, I just feel like I’m not pushing myself enough. To me, that makes me feel like a failure.

I’ve been feeling a lot of different things here lately. I have been lacking on my ideas for articles outside of this blog but I’ve managed to crank out four for the rest of the month! They’re mostly spontaneous blog posts and that’s better than nothing at this point! I’m hoping I get out of my shell a little bit more and get into some sort of routine. One that every part of my body agrees with, that would be so nice!

So here’s some life things going on…

I’ve been to the dentist a lot more than I wish I have been in the last two months. I got told the other day that one of my back teeth have to be taken out. I even had headphones and he managed to say that when my music was shut off. Next time, my dad stays in the room and holds my iPod. My mom is off iPod duty. I also got told I have a small mouth despite people saying I have a bad mouth. However, the appointment before the fillings I did get to visit this infamous record seller I’ve been hearing about since 2012. You’ll hear more about that on Friday! I’ve also got different family members having serious issues going on too. It’s honestly a big mess.

On Sunday, we finally our first batch of snow!! My mom got me up early that morning to take me to the bathroom and she showed me some of it outside of my window. At first I was like, “where is it?” and then she said “see the trucks” they were covered in snow! The kids in my hometown got to enjoy their first snow day of the year. My dad said we only got little over two inches but it did rain all Saturday and that night the rain switched to snow. I’m sorry for the lack of pictures of it, but if it makes you feel any better I never get to go outside and enjoy it myself. I did get to have Grumpy and Bootsie in my room for a bit. I got a lower back rub while they were both busy cleaning themselves! Since they’ve both been fixed, they’re so lovable now!

How do you deal with pressure of getting things done? Any tips for me to learn!