Hope everybody had a good weekend and a great week ahead! Today I am talking about nails! It’s like two or three girly things that I actually enjoy! My nana and I didn’t get any new polish for Christmas, but we made due with what we already had in her cabinet.

My original plan was paint them before Christmas with blue and white to represent a very festive theme but without using red and green! Unfortunately, neither one of us had white polish.

I also had to wait a bit because one night I decided to rip off one of my toe nails. I know that’s disgusting. I’ll say it’s not pretty when it happens either. I actually wore a band-aid on it for like three days and I didn’t realize how much I actually use that foot/toe until after this happened! I could barely type with or without the band-aid on. The whole thing was a disaster!

Now that it’s been a whole month and there’s no more redness in the exposed area, I can finally paint them! While I was at my nana’s house last Tuesday afternoon, I asked if she could do them while my papaw was busy in the other room. We used a beautiful shade of blue that reminds me of Butler Bulldogs basketball team and a shiny Emerald green I got from a family friend. I didn’t plan on using that one until I opened up the cabinet and found it. We mismatched them because it’s my favorite theme. However, I really love the blue that I wish I had just used that instead!

You should have seen us trying to take pictures of both my feet and the polishes for this post! I’ve been trying to figure out ways to pose my toes after I get them painted but they are so awkward and stiff that it’s somewhat difficult to see what works good for us! My nana took the pictures of my nails for me and I did the polishes underneath a notebook. I have the worst time getting them to lay out evenly so you can attempt to read the labels in the front. Sad part is I don’t even remember what brand the green one is from so I’m sorry about that too!

What do you think of my nails? What colors do you have on your nails? 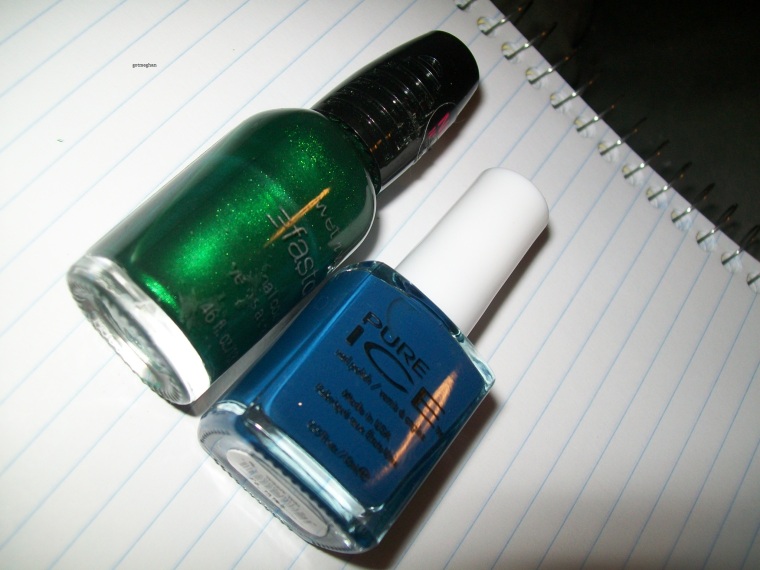