Well now we’re getting down to the wire of getting Halloween decorations out for the house, fun costumes for the whole family to wear and candy for the trick-or-treaters, At the end of this week it’ll be Halloween like legit and I’ll probably be tucked up into my room watching Halloweentown eating candy we don’t give away to our neighbor kids.

I haven’t done a DIY post in so long that I thought it wouldn’t happen again until Christmas. This season has been a little different for everybody I think. From late September to the beginning of November, my nana and I usually decorate pumpkins. I’ve been looking forward to glittering up a pumpkin for a while! I’ve explained in my other posts that my mom has bought a couple of pumpkins to use as decorations for our front porch. Now we have six of them and I’m not allowed to glitter them! So I’ve had to find something else to DIY for Halloween! At the beginning of October, I was involved in a blogger chat hosted by Jenn and the theme was Halloween/autumn DIYs and after that chat was over I went on Pinterest and I found so many crafts I wanted to do that I was a bit overwhelmed! After looking through for inspiration the next day I went to Wal-Mart with my folks and I purchased three wooden letters: B-O-O.

Since my Aunt Laurie and Uncle Mike came down the other weekend, my nana and I thought maybe we could get them to agree to do some pumpkins with us or help us with the letters instead. We didn’t get any pumpkins but we did have some fun doing the sign though!

If you want to do what we did, here is what you will need:

Now I have to say there were a couple of things different from how my nana and I usually do our DIY projects while we’re both in our wheelchairs. Well, the day we did this she was trying to learn how to work her new laptop, so I got to be on the floor for the first time doing a craft and I felt so comfortable! It’s hard work to support not only upper half of my body in the push wheelchair, but my neck as well! I didn’t have much pain this time around because I didn’t have to worry about the seat moving on me everytime I moved my legs. It’s hard being disabled and using your lower limbs as hands and keeping your posture at the same time. I made it though!

Okay, let’s get done to business! My Aunt Laurie laid out the newspapers out on the floor and helped me with the glue, unfortunately I couldn’t squeeze the container and put it on the sponge brush. I’m pretty sure I would have fallen over if I had done that! I don’t remember whose idea it was to get these sponges but they were a genius! The handle was perfect for me to grip and I used it like a normal paint brush and brushed glue across each letter. Once I got a section covered I put the brush off to the side and Laurie or Mike would give me the bottle of glitter. We had the mini bottles of glitter that came in different colors and at first I left the lid on it but I was having some trouble with covering the area with glue on it before it dried up. Each letter was placed on a paper plate that way if any excess glitter came out we could (try) put it back into the container. After we were finished covering the whole letter we tipped it on its side and let the excess run off. Laurie tried to recover most of the areas that were now naked. After each letter was done we put them on the side of the newspaper to dry.

We couldn’t find any wood boards so Mike purchased a fairly large foam board. I was told that he was going to use a section of it to create a stand for it. At first we didn’t know if it was going to work because the “O’s” didn’t want to stay in their spots especially the first “O” it kept wanting to slide off. Poor Mike had to put his finger on it for almost half an hour. I’m not sure what kind of glue he used because I don’t think it was the same we used with the glitter. The other two letters weren’t too bad so that was good! However, when we put all three on the stand we thought it needed something. I forgot to get an exclamation point, but honestly I don’t remember seeing one with the others! At first we were going to take a small area of the foam board and use a pin to connect it together and glue it into the stand itself, but Mike made a whole exclamation point to glue onto the board . So I glittered it orange to keep up with the Halloween theme! After I finished throwing the glitter on it, I decided that I wanted to try to put the glitter back into the container. I fold the sides to make sure the excess glitter went in the middle of the plate and hoped for the best. Majority of it did make it inside the bottle the rest went out to the sides. I even put the lid back on and locked it.

Not bad for my first try I must say! This was so much fun to do, I think my aunt and uncle enjoyed it too. At least I hope they did! So this is what we did.

What have you created for autumn or Halloween? 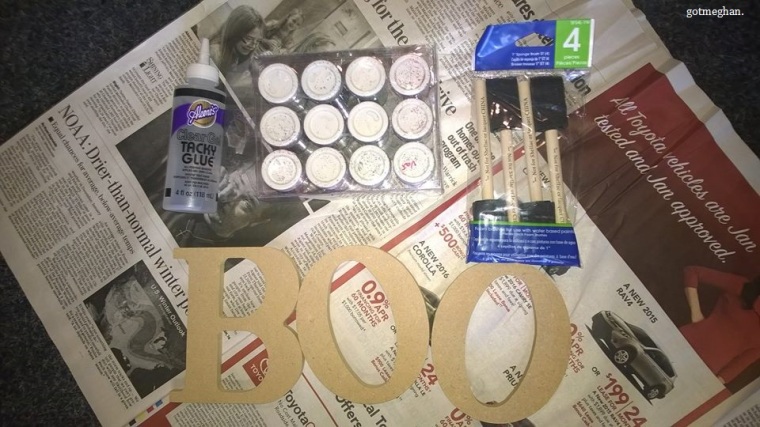 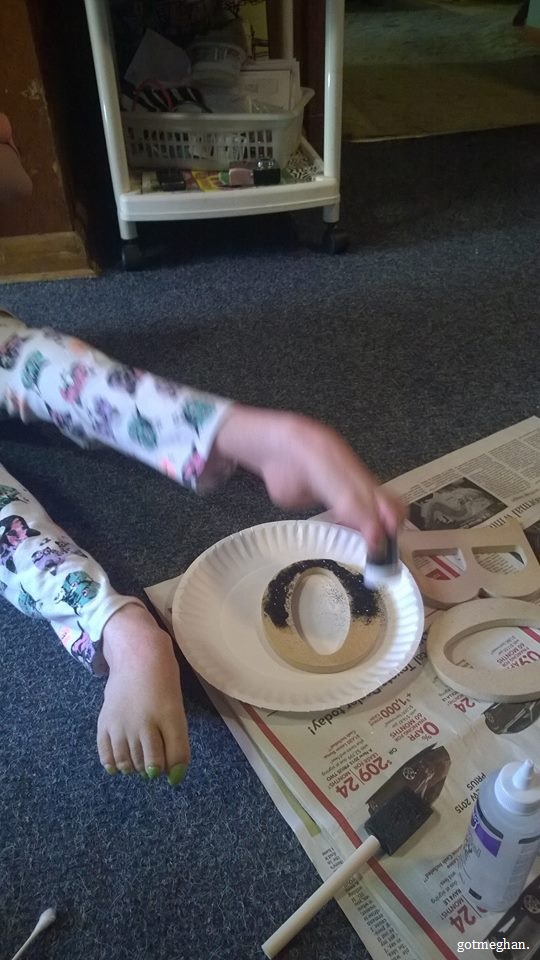 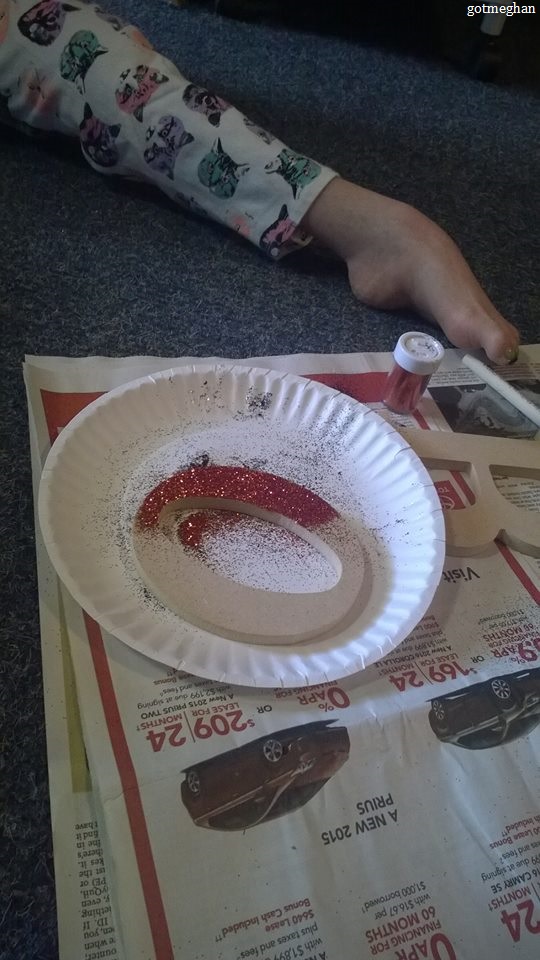