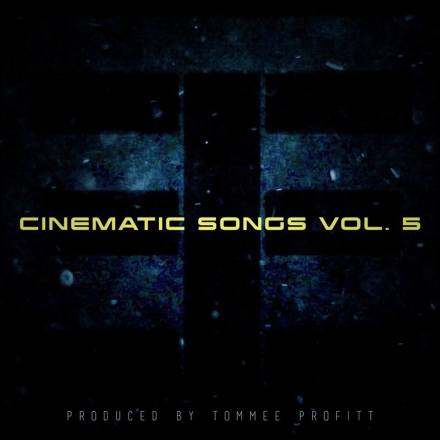 We’re back with another batch of cinematic songs by record producer Tommee Profitt! I was so excited to hear that we would be getting another album, especially the fact that it would come out the day after my birthday! Unfortunately, I had to wait over two weeks to finally listen to it because I’ve had some issues lately, but it’s only added the fuel to the fire that I need to listen and review this for all of us!

If you’ve never listened to a Tommee Profitt cinematic volume before, he usually has close to 12-13 songs in some type of epic sound. So, you might have these powerful, in your face tracks that everybody seems to go for immediately, but he’s also started to come out of his shell and experiment with other genres and tempos too. The majority of them with independent, based in Nashville artists of various genres. For this one, we have six “veterans” coming back for this collection along with a few newcomers too. Tommee also likes to include a couple of instrumentals to the layout as well and I think it always give the album an edge to the whole thing.

The first track we have is “Heroes Rise” and it has Sam Tinnesz on it. I really love Sam’s soulful voice against these hefty beats. For this, I really like the slow build to the whole song. Despite having a strong ending, it’s actually pretty gentle and will inspire your inner fighter to come alive. Now for the next song, “You Made Me Do It” can actually all songs can be about whatever you want, you just have to change your perspective! I am really in love with this one though. It has a sassy sound all around, and I think Ruby Amanfu has a terrific voice to give it that extra edge that it needed to take it over the top! It’s definitely a favorite of mine for sure!

We all know and love Fleurie’s voice, and I’m so glad that she continues to work with Tommee because he always seems to make her sound even more beautiful than the last one. “Can You Feel The Heat Now” was the first song I actually listened to, I was on YouTube listening to my mix and it automatically came on, and since I didn’t recognize it at first, I kind of figured it was probably new. I like the calming piano introduction along with her sweet voice and then all of a sudden, this electric guitar sound would appear and gave it a nice rock-ish vibe. From the moment it starts, you get this feeling that it may not be as good as you originally thought, but what I really liked about it was not knowing what could come next. Would it stay in this tempo? And then towards the end, it does grow but not as grand as we’re used to with an average Fleurie song. Jung Youth is a Christian rapper, that has worked with Tommee before and I really love that we’re hearing a hip hop-cinematic fusion. “Who’s Gonna Stop Me’ is a great workout song to listen to gain that motivation when you need it the most!

For this next song, “Witching Hour” we hear a newcomer by the name of Brooke Griffith. It’s an extremely spooky track when it first starts, which will fit naturally with the paranormal television shows like The Chilling Adventures Of Sabrina, Riverdale, and Legacies. The cinematic elements to this song really made it come to life. I just wish it was longer! Our first instrumental is “Dark Conscience” and it really continues the ominous vibe we had going with the previous song, except the original beat is gone. I really like the usage of the horns and violins, because they each have a creepy factor to them. I just feel like a monster is going to be unleashed at the end of it. The seventh track, is “Follow Me” featuring my favorite Ruelle. This has a lively, but cosmic feeling everytime I listen to it. I get a real futuristic sense, and weirdly enough I actually liked it.

Sam Tinnesz comes back with “Far From Home” and it also mentions that it’s the trailer version, so there must be an original somewhere. Even though I’ve never heard of the other one. It’s kind of has a mellow sound to it, but towards the end of the climax, it gets faster and almost louder. I think it’s pretty good! Afterwards we move on to, “Rise Above This” and the singer on this one is Trella. Unfortunately, I was really torn about this because initially I didn’t like her “ahhs” up and down the scales, but the rest isn’t that bad. So, I’m still questioning that one a bit. “I’m A Ruler” is up next and Ruby Amanfu comes back for a second round. She brings that sassy voice again, and what I loved about it is the pop-bluesy sound you get with this. It’s not a song that could really work with a action based film, unless there’s a female-comedy vibe going on.

“Unbreakable” starts the end of the album, with Mike Mains on the vocals. I really adore Mike’s voice as well so I was happy to see him on the tracklist again. The song itself has an awakening kind of vibe going on, and I really like the lyrics with this and I definitely approve of the mellow beat it has with it. It was in your face, but not overwhelming! We have our final instrumental, “Infidels At Bay” and for once we have a makings of a ballad, but it doesn’t really stay like that. I would love to hear at one softer song or ballad with these albums to kind of give the listeners a nice little break. This was a good attempt. Our last song is “A Storm Is Comin” by Liv Ash. I like the thunder rumbles with the fast going piano playing, I thought that was a cool combination. The cinematic part does break through like a storm and it really has a fiery ending. It was just perfect!

I was really impressed with this, but I’m pretty sure I say that about every volume so far! Oh, I don’t care. Cinematic music in any form makes me really happy and I really love hearing new artists being featured on these songs, that maybe you wouldn’t hear otherwise. If you’ve never heard anything in the cinematic/trailer music world, you should really look into Tommee Profitt’s other four albums! Just go in order, you’ll thank me later!

Have you listened to Tommee Profitt’s new volume of cinematic songs yet? What were some of your thoughts? Before checking this out, had you ever listened to any other composers in the epic music?