Last night, I had a fun time just hanging out on our back porch while our flock of cats. This was my second visit I did sitting on my butt. After the first time, I told myself not to be in such a rush getting out there because then I’ll be miserable trying to catch my breath and I’ll really be hurting in my back and hip areas. This time I grabbed my phone and proceeded to “jog” my way out of the house. I didn’t force myself to go faster and now that I knew how far the door opens I know where I need to be, but this time our cat Oliver wanted to come out with me. He’s been wanting to spend a lot of time with me lately. I don’t know why but he’s been sitting on my laptop while I eat and laying on my Transformers blanket. Usually anytime I go outside I’m in one of the wheelchairs but I’m always taller than them and can easier miss my limit and fall out so my mom suggested this and we’ve been doing it ever since. It’s nice be at the same level as the bigger cats like Bootsie, Midget, Grumpy and Wren. I think the babies though are a lot better with me being at their level, I’m less scary to them. This seemed to be true after I got to spent time with Grumpy’s twin, Stormy. She let me pet and take pictures of her. We are in the process of sailing the babies even though I’m pretty sure my dad wants to keep Kelso, as we had someone looking at them and he yelled out to my mom, to sale the females first! Kelso is our only male. 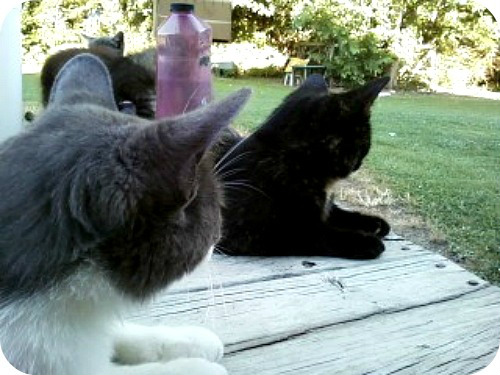 While I was sitting outside, the cats that were on the porch were basically ignoring the crap out of me and passed out. I feel bad for them because I wasn’t the only one getting bit by these damn mosquitos, so were they! Little Stormy was obviously not happy about them being around her ears. She had to change her position about three times just to get comfortable and get them to leave her alone. I spent my time taking pictures and comparing Grumpy to Stormy. They do look like twins. If it wasn’t for their size difference you’d think they were in the same litter. I had my hair in a ponytail and I had some of my bangs hanging down in my eyes and I had hoped the corner of my eyes was just from my hair but unfortunately it wasn’t. A mosquito had gotten me right by my eye and of course you can’t put itch cream on that part so I had to deal with it. Thankfully I can’t reach up there or it would have been a real problem. I thought once I was ready for bed, it would just drive me nuts but by the time I went to bed my mom said you could hardly see it. Oh, everybody knows that I love sunsets. I love taking pictures of it at least! Well, I figured out how to get the tall trees with my phone. Who says if you take pictures with your feet you can’t get the top? I’m pretty proud of myself and I even took a selfie but I will not share that on here. I look okay, but this post isn’t about my looks. Just the cats and great outdoors! 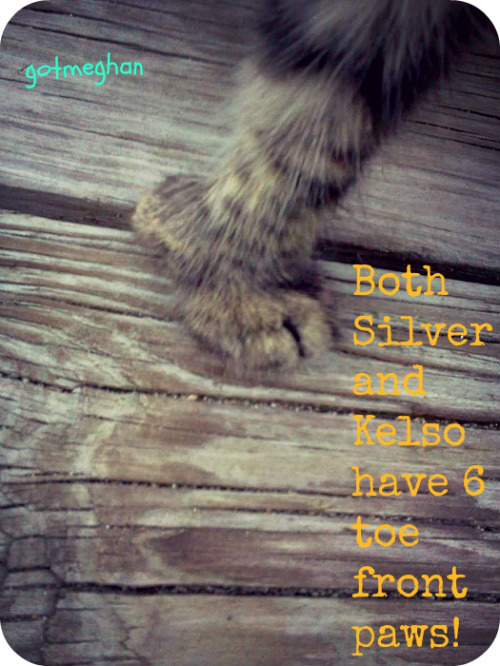 Our internet connection was off from probably one in the afternoon until whatever time it decided to come back this morning. I did have a post lined up for today, but I didn’t finish it in time to be published and I don’t want to go back to it because I have no idea what I was thinking about when I trying to do it. Since my sister is here for her spring break, she’s been trying to keep up with her working out throughout the day like she does while she’s at school. So she’s been taking advantage of our backyard and since the weather has been amazing the past few days, the kittens have joined her while she’s thrown a softball and kicked her soccer ball around, but she was pretty bored Sunday afternoon so she talked mom into putting the Wii into the living room and that almost ended bad considering mom tore the sensor jack out of the wall of her room. So we were borrowing our neighbors jack for the time being. Nobody in our house has played with the Wii for a while and so she’s been using it up pretty good, between playing Just Dance 3, bowling, and baseball she’s been using up her energy well. I’m guessing she still regrets playing Guitar Hero too, because by the time she switched to that she was complaining about her wrist hurting a lot.

My parents decided to enjoy yesterday’s beautiful weather too and dad got the bike out and took my mom out riding with her new leather jacket and boots that she got on Saturday. I decided that since they were going out that I would sneak into the living room and watch Blondie play baseball. The babies were outside and they have been enjoying the nice weather a lot that everytime my parents open the back door they go running out to play, it’s so cute! While I was watching Blondie play, she was messing with her phone and I decided to see if anybody was at the door and only Midget was, and ChiChi really enjoyed me being on the floor too! She jumped on my legs and licked my face. Three weeks ago, I traveled into the living room because I was bored and I haven’t scooted on my butt into  any place in this house for so long that my thighs actually burned and were so sore. I’m happy to that when I scoot into the living room yesterday they didn’t hurt as much, but that soon came back to bite on the butt because after a couple of games my sister switched Just Dance and did dances before asking if I wanted to do it, I said sure because I wanted to have some fun too! So she carried me to my wheelchair and grabbed one of my elbow pads because my pinky toe isn’t the strongest toe ever and I have a tendency of dropping the controller on the floor because it just gives out. I’m so low in the chair that the sensor had trouble with finding a couple of times, and when you’re doing dance moves that’s not a good thing, but I got eight points with five songs.

By this time my parents were back and my sister was being nice and she got me a drink because apparently between the sweat, the pain in my thighs, and my breathing it sounded like I needed one! I asked my sister if getting eight points with only doing five songs was a good thing? For one thing, never asked her able-bodied sister who gets four to five stars with each song she does, because I think in a way I deserved the look she gave me. She gave me this look like “ehhh…” and what is funny was my mom was watching her and she saw the same expression I did and we both called her out on it. Thankfully, I’m the type of person who sees the humor in almost everything so she’s forgiven because I was stupid for not rearranging my words better. After that, she took out the batteries and we had been watching Ridiculousness the night before and we taped the new episode for dad and since we were all in the living room having a family moment we ended up watching it together, this time with fewer commercials! Today, my mom said it’s supposed to be like in the 70’s and to me, that’s perfect weather to go outside and go on a walk, but there’s a big chance the ground is still moist and muddy, so my plans may not be accomplished but that’s okay maybe my sister will be ready to play Just Dance later this afternoon.