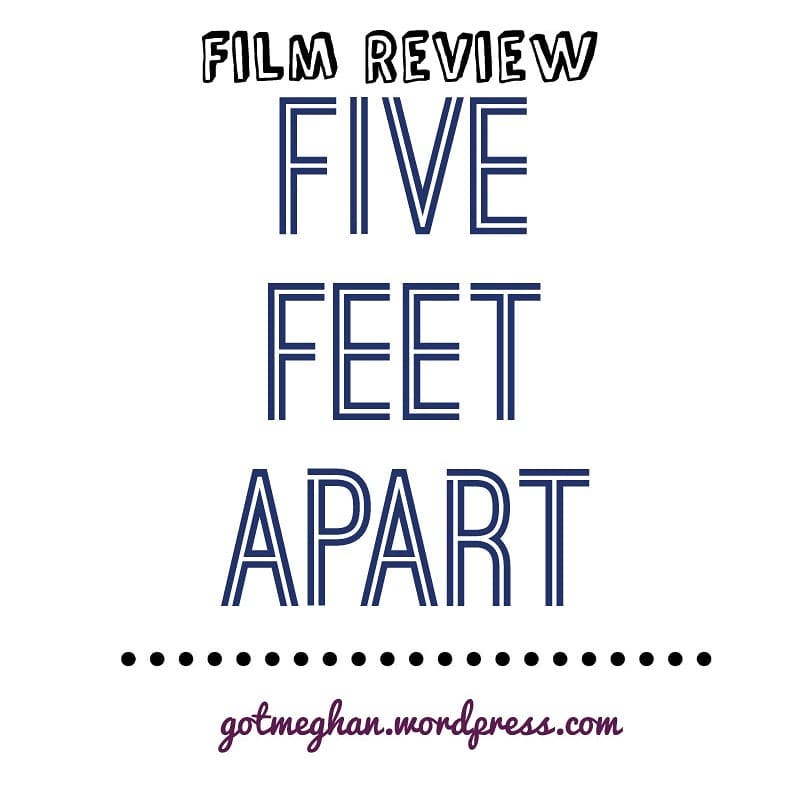 On the day I finished this post, I’d been sick for at least a week and a half. It has been so frustrating to say the least, because at first we thought it was allergies and then three days later, I developed this awful cough and my mom had to get some medicine tablets because I refuse to drink the liquid stuff. Hopefully, this isn’t your only post of the week but let’s not push our luck!

I am very excited to finally chat with you about the film adaption of Rachael Lippincott’s novel Five Feet Apart. I mean, this was the main reason why I wanted to read the book in the first place. Before we continue, I have to say this post will probably have spoilers included, so if you haven’t read the book and want to, I highly suggest you skip this blog post for now.

The first thing–well, there were two actually–I had to tell myself. I literally had to give myself a little talk because I had read the book and I was still reeling from the fact that I cried many times and enjoyed certain scenes within the story. I knew it is going to be very sad and when I finally I made a deal to watch the whole thing before I judged everything that was presented on my TV screen.

What I Really Thought

So, I absolutely loved the film! I was surprised by my reaction after I finished it because I didn’t think I would love it that much, but yes, I thought it was absolutely beautiful! It didn’t have every single thing, but it had enough that it followed the same timeline from the book, and that was it for me.

One thing that I totally forgot to put into my head while I was reading the book was that hospitals are busy places, as you see on film. However, while I was reading the book, the only professionals that turned up in my head were Barb, Julie and Dr. Hamid. That’s it. I don’t know why I just kept other nurses or random people from entering various scenes. I mentioned in my book review that I used the hospital I went to back in 2002, to draw some inspiration on how to map out this massive space, and the section I stayed had probably three or four nurses at their station. So, we were never without someone there besides our parents of course, so I don’t know how I managed to create a space with only three medical professionals!

Have you watched the film adaption “Five Feet Apart” yet? If you read the book beforehand, did you have any issues with it? Did you like it just the same? Tell me your thoughts about it below!

One day after I finished writing Monday’s post, I finally finished this book. I knew I was close to being done with it, but I figured I would savor it a little bit!

I came across this book twice – the first was when the trailers of the film adaption were being played on almost every channel and the other was through a fellow blogger who literally tweeted she cried more than she though she would. I definitely had to wait to read this but I can say it was worth the wait! Now I can finally check out the movie and see it lines up with what I was seeing in my head or not. 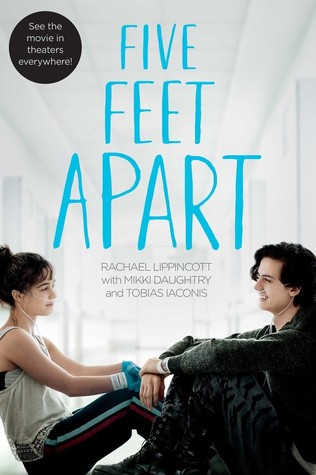 Can you love someone you can never touch?

Stella Grant likes to be in control—even though her totally out of control lungs have sent her in and out of the hospital most of her life. At this point, what Stella needs to control most is keeping herself away from anyone or anything that might pass along an infection and jeopardize the possibility of a lung transplant. Six feet apart. No exceptions.

The only thing Will Newman wants to be in control of is getting out of this hospital. He couldn’t care less about his treatments, or a fancy new clinical drug trial. Soon, he’ll turn eighteen and then he’ll be able to unplug all these machines and actually go see the world, not just its hospitals.

Will’s exactly what Stella needs to stay away from. If he so much as breathes on Stella she could lose her spot on the transplant list. Either one of them could die. The only way to stay alive is to stay apart. But suddenly six feet doesn’t feel like safety. It feels like punishment.

What if they could steal back just a little bit of the space their broken lungs have stolen from them? Would five feet apart really be so dangerous if it stops their hearts from breaking too?

There was only one thing I knew about the story, and it was the disability aspect of it. I think reading John Green’s The Fault In Our Stars helped me a lot when it came to understanding cystic fibrosis or CF as it is mostly called in the book. It kind of put things in perspective thinking back to my own lung function, especially before I had my back surgeries in 2002. The technical term is: spinal fusion surgery. If you’re not too queasy about blood, you should check it out online. I wouldn’t surprise me if there’s a video of it on YouTube! Growing up, I was never able to breathe right because my spine was so curved, it was slowly crushing my right lung. What I didn’t know until about a month or two ago, is that my lungs are still undeveloped because of the damage my spine caused.

I think another way I understood the character’s stories is because I spent three and half months at Shriner’s Hospital for Children. Once the author was explaining the layout of the hospital, I was basically using my memory of the buildings I was in for my stay to reconstruct what it could look like, but it wasn’t as fancy as the book though. I also felt like I was both Stella and Will in different ways, because I remember being likeable among the nurses there but also a rebel like Will. As Will had found his way out of the hospital, I escaped once but it wasn’t to go onto the roof, I was actually searching for my mom.

I loved this story for many reasons. Of course, I liked the fact that it brought me back to a time in my life that seemed so small but in reality it wasn’t. Three and half months is a long time, especially when you’re surrounded to new people, other kids with disabilities (and that alone was different!), but on top of that you have the surgeries and recovery time. I was fortunate enough to have all three surgeries be successful, whereas there were others who had the same surgeries but their bodies were rejecting the rods. They had to be there longer. They were away from their families and friends, just like Stella, Will and Poe.

I was pretty pleased on the fact that I could picture everything going on; to Stella in a full handmade hazmat suit to the black truffles! I felt like I was right there with them, which is why it probably made me more emotional because I was around the same environment. We definitely had more than two nurses watching over us. A lot of them were like Barb and Julie, but instead of using a favorite nurse I enjoyed being around and let me tell you, there were a lot! I exchanged them with someone else. I miss them and I think that was the main reason why I didn’t want to put their faces in those characters. I was already emotional by what was happening in the story, I didn’t need to add another layer to it.

Stella had the right idea of vlogging her time in the hospital, and talking about her struggles with CF. And just being a supporter to others with the condition! A part of me wishes I had discovered blogging or enjoyed writing in a journal while I was there. We took lots of pictures but I would love to read what was going on in my head at that time. We had lots of activities, involving arts and crafts, but nothing I did ever survived the past 18 years. Yes, that number is correct. It has been 18 years since I had my surgeries. A lot of family members and teachers I had in school are probably going to be shaking their heads after reading that sentence!

By the time this post goes live, I will hopefully watched the film. I will also write up a review on that in next couple of weeks. I cannot wait to do that next! Okay, I’m done now.

Have you read or watched Five Feet Apart yet? What were your thoughts on it?