Well, I have some exciting news to share with you! On the 20th of April, I hit the halfway point in my Goodreads Challenge by reading 10 out of 20 books! The same day, I started reading this book: Divergent by Veronica Roth. Honestly, it was on my TBR list but I wasn’t necessarily looking for it, but when I found it as part of Amazon’s Prime Reading, and I took it as fate. What I didn’t expect was that it would be my second longest book for the challenge and how grateful on the fact that I hadn’t watched this series as much as the Harry Potter films!

And yes, I will be talking about my feelings about the comparisons between the book and movie, but I’ll be leaving it until the end of this post. For now, let’s continue down this post. 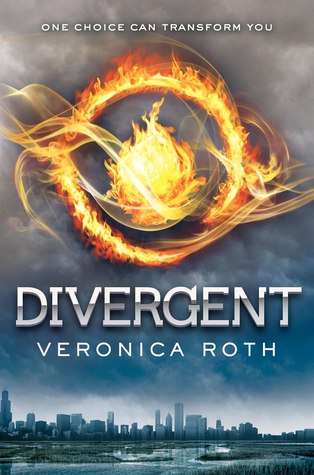 This first book in Veronica Roth’s #1 New York Times bestselling Divergent trilogy is the novel the inspired the major motion picture starring Shailene Woodley, Theo James, and Kate Winslet. This dystopian series set in a futuristic Chicago has captured the hearts of millions of teen and adult readers.

Perfect for fans of the Hunger Games and Maze Runner series, Divergent and its sequels, Insurgent and Allegiant, are the gripping story of a dystopian world transformed by courage, self-sacrifice, and love. Fans of the Divergent movie will find the book packed with just as much emotional depth and exhilarating action as the film, all told in beautiful, rich language.

One choice can transform you. Beatrice Prior’s society is divided into five factions—Candor (the honest), Abnegation (the selfless), Dauntless (the brave), Amity (the peaceful), and Erudite (the intelligent). Beatrice must choose between staying with her Abnegation family and transferring factions. Her choice will shock her community and herself. But the newly christened Tris also has a secret, one she’s determined to keep hidden, because in this world, what makes you different makes you dangerous.

Edit: As it is mentioned in the burb above, for anyone who has read this series, would I really like reading The Hunger Games? All three books are available on Kindle Unlimited and I’ve been tempted to get them. So I just want reassurance that I will enjoy them,

When I first started reading the book, I was finally introduced to the character Beatrice or Tris as we grow to call her after the Choosing Ceremony. You get to understand her feelings over her born faction and the love of her family. The generated phrase “faction before blood” doesn’t matter to her really. She feels like she shouldn’t have to chose between her parents, brother and a whole new set of ‘family’ within her new faction. However, it is worth the mention, you can definitely feel the same drive she has to become part of Dauntless too. A part of her has always been influenced to figure them out and you can see how much she strives in that environment throughout her journey.

The amount of pages in this book is over 400+, which means you get to see every angle of the transformation of Tris, when she questions herself but yet she appears very strong too! You see her make friends for the first time and discover love–and then see it as part of her fears. The initiation stages are really overlooked in the film. It made her look more like a weakling compared to this thriving individual in the book. Yes, she is hiding herself as being a divergent but I still thought she could do it and I wasn’t thinking that when I watched the film, I viewed it as just a prediction. Here, there was room to see her mistakes and triumphs.

Another thing is that Jeanine Matthews is a pretty prominet character in the book, whereas she doesn’t even make an appearance until Insurgent movie. Her presences is very proud and knows exactly what she is doing to everyone. Between Tris and Jeanine, they are the main factors to the possibility that maybe one day I will finish the rest of the series. One good thing is that I’ve only watched the second and third films once, so I actually don’t really remember what goes on so I feel like it’ll make things a whole lot easier for me but I am also excited for that day I get to continue the journey of learning about the rest of Tris’s story.

Have you read the “Divergent” books by Veronica Roth yet? If you have, did you also see the films too? What were thoughts about the similarities or missing information to the characters?