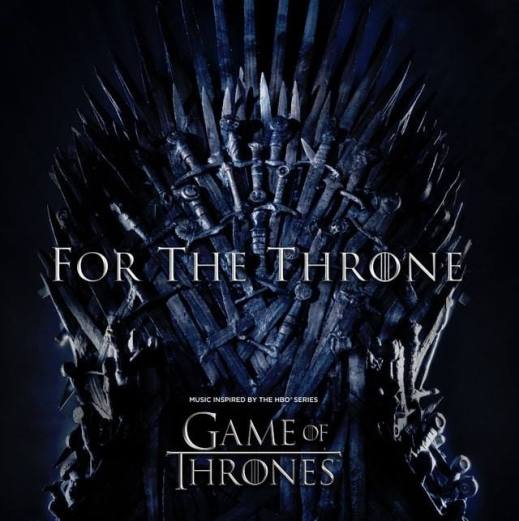 I don’t know what made me decide to do this review, but I thought it would be fun and I also really wanted to talk about how you feel about these types of releases, are you fan of them or think they’re kind of annoying because they don’t match what you pictured in your head for the last nine years? You’ll find out my answer soon!

This album is pretty hefty, which I was kind of surprised but grew to like it because that leaves more room for other artists and genres they mainly work in on a daily basis. It’s also a collection of popular and no-so-popular artists as there were two that I have never heard of before so I am a bit intrigued to begin with so that’s a plus! When I started writing this review, I was already listening to the album but quickly stopped before I went too far to come back. Hmmm… sounds like something you’d hear before going over The Wall. Anyways, let’s start, shall we?

The first track is called “Kingdom Of One” by Country singer Maren Morris. It is such an eerie, but soft song that definitely embodies that Game Of Thrones vibe, as it’s darkness and somber look with every episode. I think it has the right amount of edge and makes you curious to what the rest of the record will sound like after it’s over. It’s perfect. The first single to be released was “Power Is Power” by The Weeknd featuring SZA & Travis Scott. I thought it was interesting how different this one and the previous song were, but I liked them for what they bring to the album as a whole! However, it does sound like the Black Panther song, “Pray For Me” with this popping beat at the end of the chorus, so that pretty much bummed me out a bit.

We move on to “Nightshade” and I cannot lie, the first thing that jumped up at me was the big green explosion in season six. It is sung by The Lumineers, and thanks to the band’s background in folk music, the vibe of this song is totally new. In a way, it has this peppy sound mostly because of the pianist using the higher notes, so it has this urgent but calming atmosphere. I kept thinking something else was coming but it never doesn’t. It just stays in this one place and usually I’d find this really annoying but I liked it. The fifth track is “Hollow Crown” by Ellie Goulding and this may be an unpopular opinion to some, but you can’t have a movie or in this case a television show soundtrack without Ellie Goulding in it. Now as I say that, I thought this wasn’t as good as some of her others. I figured it would be much darker like the title somewhat suggests, but it’s not like that at all. The beat is fairly boring; nothing about it really grabs my attention and I was really shocked by it.

Next there’s “Baptize Me” by X Ambassadors featuring Jacob Banks. This was one of the artists I was unfamiliar with, so I had to go check him out after I was finished. I swore up and down it was Rag’Bone Man with his deep voice. I enjoyed the laid back vibe of this one. It has a nice groove to it, and I thought it was weird because I didn’t think it was a GoT type of song but then I thought, we need a light=heart song because it’s not all about blood and glory. One song that I thought brought out the most GoT feelings, was “Too Many Gods” by A$AP Rocky featuring Joey BadA$$. This was very mellow as far as rap songs go, so I ended up really loving it! It wasn’t too much in your face and gave you this calming perspective. Our seventh track is “Turn On Me’ by The National. They are a rock band that have been making music since 1999. I really, really liked the softness of it. I am so used to hearing epic songs for movies that I keep forgetting that rock-pop could be a really good change, because there are sweet moments between our characters and so I have grown to appreciate this take on these songs.

The ninth song is “From The Grave” by James Arthur. I love James Arthur. He gives out so much emotion and a rawness that I feel like I need to hear on a weekly basis to remind me “this is what men sound me”. I really loved this one because I feel like it could be a dedication to the characters that died throughout the duration of the show. We move on to “Me Traicionaste” by ROSALIA and A.CHAL. I thought this was an interesting track because this completely in Spanish. So, we bring in other worldly sounds to the album and despite having a couple of rap songs included for some reason I didn’t think there should be a song like this on it, but I enjoyed having it be apart of it too!

Our next song is “When I Lie” and it’s a remix of the original version. It’s by Lil Peep and features Ty Dolla $ign too. One thing that I really liked about it was this hip hop mixing with rock sound. It’s one of my favorite combinations! I’m familiar with Ty but not Lil Peep, but I thought both of their voices were great in that echo-y sense and it all has a nice groove to it so I thoroughly enjoyed myself with this. We move on to, “Love Can Kill” by another artist I never heard of before, but I grew to like her voice anyways. Her name is Lennon Stella. She reminded me of Alessia Cara and Billie Eilish. Anyways, I like this pop-y thing going on, but I didn’t get it was inspired by GoT but then once I really paid attention to it, I thought it could work. The twelfth song is “Wolf At Your Door” by Chloe x Hallie. I think these girls each have a beautiful voice and the beat itself embodied that vibe of the show. It was eerie but pop-y at the same time, it’s really good honestly!

These are the last couple of songs on the album. We have “Devil In Your Eye” by Mumford & Sons. I was surprised we didn’t have an Ed Sheeran song on here, but if there was an alternative route I guess Mumford & Sons is a good way to go! This was a great song, I liked the lightness of it, between the lead vocalist’s voice and the overall sound itself. It was nice. The final song is “Pray (High Valyrian)” and I’m really glad to see this type of track on the album. It is an essentially an instrumental, there are words but you can’t really hear them clearly to make out anything but maybe “pray” and unless you are an expert on Valyrian language, you’re kind of screwed. However, the song itself is really good. It’s mysterious and makes you wonder if it’s a clue to the ending of the series.

I was really surprised with this album. I actually ended up liking the majority of the songs on it. I also really enjoyed the variety of genres on it as well. It gave everybody a chance to release something they thought needed to be expressed, whether or not they are fans of the show. However, I’d hope everyone involved are fans in the first place! I definitely didn’t picture any of these songs and the artists on this, but I thought it was really cool to see this basically come alive.Anyways, I definitely recommend any fan of Game Of Thrones to listen to this soundtrack!

Have you listened to the “For The Throne” soundtrack yet? If you have, what were your favorite track(s) on it?