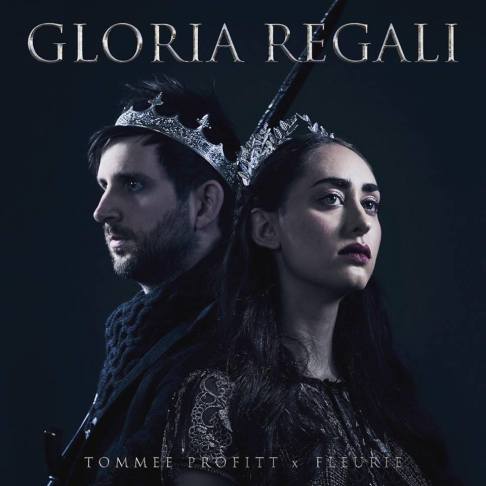 At this time, we usually get another collection of epic songs by Tommee Profitt, and I guess you would say that this would fit but the album has a very specific theme and features only one artist. So, it’s something completely different, but yet it isn’t. I think with the release of the previous volumes in the last two years, I think they were the “calm before storm” if you will; allowing our ears to hear something new to get us in the groove of a project like this to take over.

This project “Gloria Regali” was inspired by the new and unfortunately final season of Game Of Thrones. Last year, I started watching the series and instantly enjoyed it too, but since DISH does not carry HBO anymore, I am not able to watch the season along with everybody. Honestly, I should have expected this. I wasn’t really surprised when they made the announcement that it would be their last season but for some odd reason this wasn’t on my radar! Anyways, I was really excited to see Tommee Profitt using the show and maybe even the books for something like this anyways. I think Fleurie’s voice is incredible so the fact that she’s the only main vocalist on the album is really exciting to me!

Let’s start off with the first track of the album, which is the title track “Gloria Regali”. I like the fact that they start it off kind of quiet. The beat itself is intense from the moment it begins but Fleurie’s voice has this soft quality to it and as the song progresses the song just explodes with those loud drums and choir. It is a great beginning into this journey and if you have watched Game Of Thrones, it also gives you this nice image of the great war brewing and who might sit in the iron throne. The second song is “Onward & Upward” and I thought the sound was more grittier, kind of gave me the vibe of being Cersei’s theme song maybe? The reason why I say that is because Cersei is such a sly, malevolent character and between this hard-hitting beat and Fleurie’s dark emotions coming out in this. It just reassured me that this was her song, but of course I could be wrong too!

Next is “Noble Blood” and at first, I thought I would regret my original statement above, but then the more I thought about it. This could be for Queen Daenarys, Mother Of Dragons. Can you guess which team I root for? I feel like this one had a more sensual sound to it, which really led to my decision to think this could fit her in the end. I think Daenarys is a very strong character, she’s had to sacrifice a lot to get to where she is right now in the story, everytime she gives away a part of herself as far as love goes, it always seems to be taken away or used against her in some way. So she’s had to learn quick and fight within her own terms. After that, we finally have our instrumental and that is “Desolation” and the first person that popped into my head was Arya. She’s like Daenarys in a way that she’s had to grow up quick, but she’s just powerful and honestly I won’t want to cross either one of them. Your death will not be peaceful and I think that’s what this sound brings out, is this fire (no pun intended) and fierce pace fit for two strong women.

The fifth song is “Winter’s Song” of course. This brought me back to Jon Snow’s time at and beyond The Wall. I also think it’s beautiful funeral track to all of the characters we’ve lost throughout the series too. It’s just gorgeous! It is in your face, but it is very gentle. Next we have “Undone” and it also has another slow start, but I have learned to love these types of songs because they are usually the best, and I was right; the sound just continues to grow and grow and you just wonder how it will all end. The drop itself was mighty and even it had a bit of a hip hop sound towards the ending, but I thoroughly enjoyed it!

Our seventh track is “Premonition” and this instantly gave me Brann vibes. It’s the one song that I didn’t have to guess who it was for, because of the title! I do appreciate the fact that it is another instrumental. I like the change of sound with this one. It has a ton of different elements incorporated within it and I thought it had some depth to it compared to the others. We move onto “Midnight Oil” and it has this mysterious introduction that I really enjoyed, but I actually ended up loving the whole song. I instantly got this powerful feeling come around me the longer it went on! I really loved the fierce but gentle sound of the beginning but the end was monstrous and I couldn’t get enough of it really! Four minutes and five seconds was apparently NOT long enough for me!

I thought “Remembrance” was our only “real” ballad off the album. The usage of the piano was beautiful! I feel like it would fit every “Saying Goodbye To ‘Game Of Thrones'” videos on YouTube we will see just before the last episode premieres because it just has that kind of quality to it. However, I quickly realized that the melody itself is the same of another one of Tommee’s songs. “Tomorrow We Fight” and another thing they share is Fleurie herself too! I knew once I found the other one, my original thoughts would disappear, because I generally dislike hearing same lyrics and/or melody shared with multiple songs. It’s still good but I would have liked to hear something that wouldn’t have me so easily distracted in this way. The final song is “Sound Of War” and personally I hoped for a banger, between the title and being the last of anything GoT in general, you’re kind of expected it to end with a big bang. I did like the quirky sounds in the introduction and the intense banging was a kicker. I really enjoy hearing epic songs about wars. I know it’s weird as crap but there’s something with the raw emotions of the singer and the rush of everything going on in the sound behind them is so exciting! They make you feel invincible and powerful at the same time and I’m thankful that this gave me all of those feelings at the end. It was perfect!

I thought this was a fantastic lineup of music for not only GoT fans will enjoy but anybody that loves cinematic music in general. I also think that quite a few of them might end up on some people’s workout or motivational playlist. I don’t really have any bad notes to add-on because I included what I really wanted to say in each section.

Now it’s your turn, what did you think of Tommee Profitt and Fleurie’s little creation? Do you have any favorites on the album?