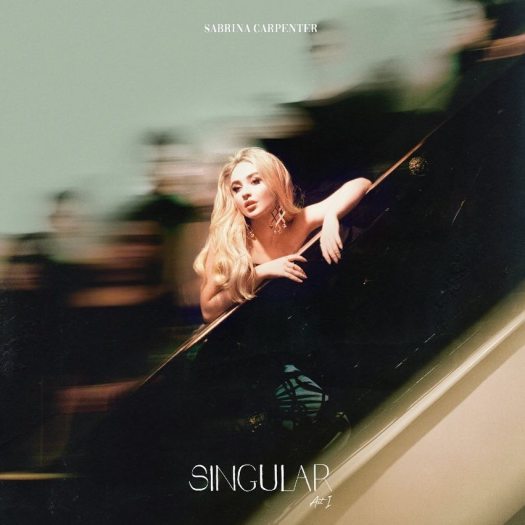 After I did the Little Mix review last week, I wondered how many other albums I missed and wanted to talk about on here. So I have found two more albums, this one and another that came out in December that I will be sharing my thoughts on hopefully next week! First, we are going to talk about my increasing love for Sabrina Carpenter. I know the last name Carpenter is fairly infamous in the music industry, but I don’t think Sabrina has any relations to them. Sabrina is an actress along with being a singer. She’s worked on the Disney Channel on shows like, “Austin & Ally,” “Girl Meets World,” and finally “Adventures In Babysitting.”

I’ve been focused on her singing career than her acting, and it was purely by accident. I caught the end of her song “Thumbs” on the radio and thought it wasn’t bad and within a week later I heard another one called, “Why” and it was just continuous, because the final song I heard in 2018 was “Lost Love” with the EDM group Lost Kings. I’ve thoroughly enjoyed all of the tracks, so when I saw that she had released a new album back in November, I was like “I need to check this out right now!” So, if you’d like to join me on this little adventure, you’re more than welcome to it.

The first song is “Almost Love” and I liked the cute popping in the beginning. The “cute” factor never really leaves the beat at all, and I think it makes it a bit annoying. A part of me hates it, but yet I’ve heard it so much lately that I’ve been dancing and humming to it, so it’s a good dance-pop song but has some little things that irritate me. We move on to “Paris” and I will be honest, I thought she had redone The Chainsmokers’s single of “Paris” but after I listened to it, I realized I was wrong but I like it anyways. I like the seductive beat and tone of her voice. I think it gives the message a needed edge. I really enjoy it!

Third is “Hold Tight” featuring Uhmeer. I’ve never heard of this person, but I am always open to new artists! This has a R&B sound to it too, which is strange because the album has been said to prominently be pop/EDM. It’s much slower, has a strong sexy vibe going on but I actually like it! I think Uhmeer’s deep voice is a good contrast to Sabrina’s sweet voice. It just added to the “feel good” vibe that was already going on. Next was “Sue Me” and we’re back on the pop train again. Unfortunately, I didn’t really like this one. It seemed really dull compared to the previous tracks. I didn’t even dance to it after the first verse was over and yes, that’s usually my sign that it’s a good song, but there was nothing with this. So, we move on to “Prfct” which is the word: Perfect, but without the vowels. The only reason why I say that out loud because I was so confused writing it out in my notepad. It was one of those days for me! Anyways, this beat is nice and easy. To me, it’s more sensual than the other way around, but I really like it.

We’re heading to the last three songs of the record. The sixth track is “Bad Time” and this only had Sabrina’s voice in the beginning, so it’s a slow start to the beat itself, but when it does appear it’s a nice real pop sound. I was a bit on the fence about it. I liked the sound, but thought it was a bit overwhelming to really hear the lyrics of the song. That is my only complaint with it. “Mona Lisa” is on now and I thought the moment it started, I thought it was a bit unique. I thought it has 00’s bubblegum pop sound to it. It reminded me of Jessica Simpson and Christina Aguilera! Honestly, it was refreshing and it actually became one of my favorites of the bunch! And finally the last song is “Diamonds Are Forever” and I really liked this one too. I thought she kind of sounded like another artist I heard recently: Elley Duhe. This has a sensual beat, but she sings it with such sass that it really makes you like it. At least, it did that for me!

Apparently I had some strong expectations to this effort than I thought I did because a part of me felt a bit let down by it. I was on the fence for about half of the tracks on this record and only had one real favorite out of the whole thing. That’s not like me to be like this, so I’m hoping when she releases Act 2 later this year, it’ll be a little bit better!

Have you listened to Sabrina Carpenter’s new album yet? What did you think of it? Do you love it or hate it?