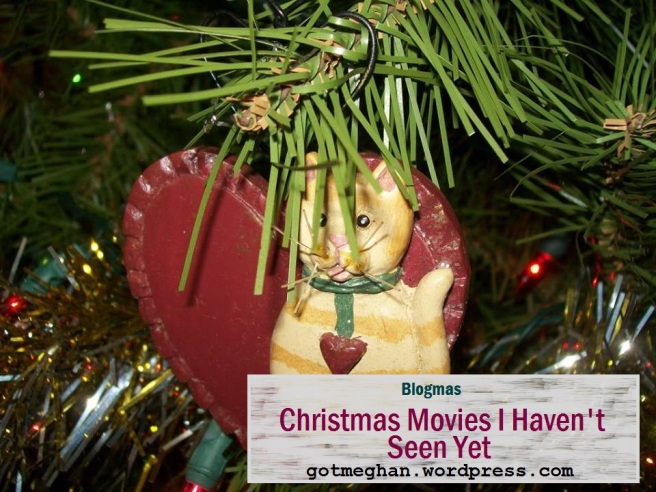 I’m back for Blogmas! Of course, I’m not blogging everyday this month but I give kudos to anyone that is, because that is very difficult. I’ve done this three years in a row, so my ideas have dwindle down like Santa Claus running out of his toys after a long Christmas night! Forgive me for the metaphor, but I hope you enjoy my holiday inspired posts–by the way, tomorrow’s post isn’t part of it. It’s more of a confessional than anything else!

I love movies a lot, but I always feel holiday films can be pretty cheesy. I like the ones with funny plots and with lots of children in there, but I’ve never liked romantic Christmas inspired films, which is the reason why I blocked out all of the Lifetime and Hallmark channels at the end of October. It’s a corny and overdone plot that somehow gets a whole bunch of people excited for the next one and I don’t understand it!

So, the list below is compiled of popular films that everybody else has seen and enjoyed over the years, but I haven’t had a chance to check them out. I hope you all enjoy!

I will be honest, I was introduced to this movie while I was watching Home Alone because the beginning of the film does play after Kevin discovers everyone has left without him. I’ve had numerous attempts to actually watch both versions throughout my life, but I’ve never been able to clear my mind to devout to it. Everybody says it’s good, but I highly doubt I’ll ever get to watch it.

I feel extremely guilty about this, but I found this on the AMC channel on Black Friday, but forgot to tell my nana that it would be on that afternoon! I felt so bad! It’s one of her favorite films and I actually will not watch it until she has, so hopefully between my aunt, uncle and I, we can find the black and white version on TV for her to watch finally! I think after she’s seen it again, I will eventually get to it, but until then it’ll sit on this list.

I really don’t understand how this could be a Christmas film but apparently it is! However, if I’m correct, this might be just unique enough for me to enjoy, because I am a lover of action based films, I just want to know how Christmas is tied into it. I’ve been told that I should watch this franchise along with the Jason Bourne series, but I haven’t found any of them on our movie channels in order, so they all kind of belong on this post.

I had to ask my mom if we ever watched this before, she thinks we have but agrees with me that we probably didn’t really like it too much. Michael Keaton is a hit or miss when it comes to him dressing up for various roles. I barely got through Beetlejuice in once piece because of him! What’s interesting is that, you’d think being made into a live action snowman it would be kind of cute, but I’ve always had issues with this part of acting. Now the question is, if it played on our movie channels, would I give it another shot? I would try it out again, only because if I can get through anything vampire and witch inspired films, this should be a piece of cake!

I find it a little odd that I haven’t seen this yet, because I have been trying my best to let myself watch romantic-comedies without any judgement–this is a lot more difficult then it sounds as seen above! I see this everywhere after Halloween, but I always tend to ignore it. Once I checked out who was in the film, I realized that it has a similar plot like New Year’s Eve where you have a large amount of actors, in different situations and love blossoms in each 20 minute scene. I might have to watch it, because I actually love NYE a lot!

This was the movie that actually inspired me to create this post. I don’t really like creepy films despite the fact that I’m clearly a fan of vampires, witches, and werewolves, but the creatures in this are far beyond what I can take in both day and night. However, I do find the origins of “Krampus” very interesting. Even though this is clearly a thriller, it actually have some truth to it; here in the US, we say to kids all throughout the year that if they’re bad, then they’ll only receive a lump of coal. This has the same idea, but kids are basically being scared into behaving right with these half-goat, half demon beasts. Now you know why I haven’t seen this sucker yet!

I’m pretty sure I am missing quite a few others, but I just wanted to keep this list short and sweet, maybe I will figure out some more to do this again! Plus, it’s still pretty early into the month that I technically have plenty of time to watch one or two of the films on here and several others, so there’s like a 50/50 chance on whether I actually get to do a part two for Blogmas 2019!

Is there any Christmas-y movies that you HAVEN’T seen yet? What kind of genre do you prefer to watch for this time of the year?

2 thoughts on “Blogmas | Christmas Movies I Haven’t Seen Yet”