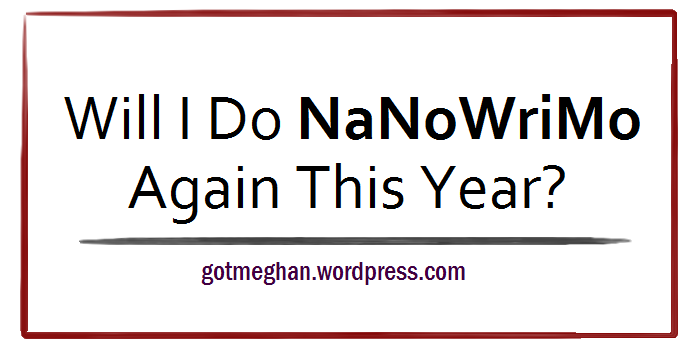 It is almost that time for National Novel Writing Month or  “NaNoWriMo” as some people like to call it. For some writers, they live for this time of the year but for the rest, it’s something that they absolutely dread. I can understand both sides, if you enjoy it, I feel like you are good at being pressured and able to write everyday on your story, but I also know why others fear it too. If you have a very active social or work life at the moment, writing is literally the last thing on your mind.

As for me, I’ve had it in my brain since April, after I wrote my post about not being able to participate in CampNaNoWriMo that I should probably do it, but honestly I don’t see the point in it. I don’t want to force anything that doesn’t want to appear to me in dreams right now, you know what I’m saying?

There is hope though as I am using Pinterest to help me generate the characters and overall setting of my story. I’ve been looking into different people’s photos and have developed a clear picture of my female characters: Angela and Star. I am still having issues with my main character Heath, most because I have a general person in mind but he looks relativity younger than I want him to for my story so I’m trying to keep an open mind to other messy blondes. And Brace is my “complicated” character and he’s always been that way, so finding him has been quite a challenge for me! The others will come eventually at least that what I’m hoping will happen!

Another thing that I’m busy looking into is how to do outlines. I feel like finding the right way to figure out how I want things to go, is the key to my success on completing my first draft. I have a board on my profile for my favorite blog posts, and since November has been coming up, other writers have been writing posts of tips and how-to’s for aspiring NaNo rookies. I have three blog posts that talk creating an outline for their stories and I will have them listed below!

Now if you are thinking about joining NaNo, I have some posts I did last year, if you’d like to look into them. I wrote three updates and I had shared some of the websites I was using to attempt keep my pace together, maybe they will help you out too! I’d like to make a point to say, that I didn’t make it to the end of the month and I explain why that happened in the final post, but I was still fairly impressed with myself on what I did get done.

Before I go, I just want to say good luck to everyone that is doing NaNoWriMo this year! You may not hit your word count everyday, nor will you like everything you’ve been working on, but I can definitely say that’s all part of the process! After it’s all over, you can revisit it, and you’ll see that you produced something awesome. 🙂

Have you ever thought about joining the NaNoWriMo party? What is keeping you back from writing your story?