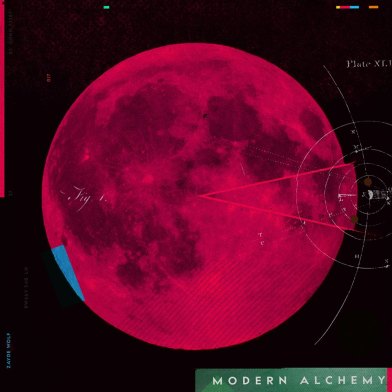 You guys know how much I love my dark alternative music; artists like Banks and Verite, are like my guilty pleasures, so that fact that there’s a male artist with that same flare is kind of cool and interesting.

Earlier this month Zayde Wolf released a new album called “Modern Alchemy” which the title alone, sounds freaking cool! I am very curious to see what we would hear on this release, because when this came out, I only listened to one song because I needed to make sure I had made up my mind about whether or not I wanted to review this. The album has a total of thirteen songs, and as far as I know, no other artists are featured on it.

The first song we start off is “Dangerous” and I liked this. I think it’s more pop oriented than I thought it was going to be, but honestly I really liked it for that though. It wasn’t overwhelming in any way, and has a great groove to dance along. Next is “No Mercy” and its a little sexy but sharp tone. I think it has an interesting indie rock vibe going on, but I really like the combination the darkness it brings. Third is “Next Level” and this one is a little bit more mellow compared to the first two songs. I think it has more of an urban feel to it, full of attitude kind of track! I feel like people could have a lot of fun dancing to this song, because it has that perfect adventurous atmosphere from the moment it starts to finish.

Considering we started on such a high note, it’s nice to see that “Won’t Ever Let You Go” has a totally different sound. It makes me think of summertime, full of youth–not calling myself old or anything–and wanting to fun all of the time with friends and in life. I really like it. Next there’s “Do What We Wanna Do” and the fusion of alternative and cinematic is strong with this one. However, it’s not as intense, but I’m okay with that. It has a party anthem sound to it, but it’s not at all in your face, claiming the title off the bat, type of songs and I think that’s why I like it a little more than I thought I would. This next one is right up my alley. I love a bold introduction and this definitely has it. Of course, this is called “Gladiator” and it has such a strong, motivational outlook to it. I just love it so much!

I always love how certain words can excite me and something about “The Crown” made me really pumped, and I was right with my thinking because this is great! You have that dark cinematic tone coming alive in this! It’s so action packed, but I’m always so worried that the lyrics will get lost with having such an intense sound included, but Zayde’s voice isn’t in a “cocky” tone, so it’s a nice medium. So good! The eighth song is “Billionaires” and since I’m in the middle of Arrow, I instantly thought of Oliver Green, but then I realized he was a millionaire, not the other one! Anyways, I am conflicted by it as a whole. As much as I just wanted a softer track, because usually once we get to a certain section of an album, we finally start hearing ballads, but not yet for this. However, it’s another summer type of song, so it has that perfect lighter sound but has a feel good vibe to it. I don’t know, it’s interesting, in a good way!

The last five songs start with “Higher Than High” and again, the mellow beat is in full force, but surprisingly I’m not over it. I’m not exactly thinking of “summer” while listening to it, but since I’ve been dealing with a number of emotional things at the moment, it gave me a sense of calm, which is really nice! You don’t have too many of those songs nowadays, or at least I don’t! Next there’s “Rule The World” and we’re back on the cinematic kick! I’m not going to lie, I would have been disappointment if it didn’t have a kick-ass beat to go with that title! I really, really love the fact that there’s drum solo on this sucker, like yes! It gives it a totally different flare, it actually brings everything out. What I think is interesting is that it brings out that fighter in the listener, at least the phoenix inside of me was awakened, even if only for three minutes and twelve seconds. I always want these types of songs to be longer!

I have to say, I was really curious about “Breathing Oxygen” I didn’t want to guess on how it would say, even though I really wanted to! I like the fact that you can find the rhythm almost instantly. It has a nice groove to it and just has thought perfect notes to it. I really like the breakdown, it’s intense with the semi-slow sections of the beat.

“Animal” is next and you have this ominous introduction but then it kind of shifts to this mellow beat. It never quite changes when you want it to, but then again it’s not that bad! I think anybody who enjoys cinematic music like me will like that it’s not following the normal standards of the other songs of the genre. It’s unique and I really enjoy the drums in it, so I can live with that.  Lastly, we have “Take A Look At This” and we somehow went back to pop music. I seriously thought I was listening to Justin Timberlake when this first started like no joke. I like being able to dance to it and the fact that it’s asking you to pay attention to it. It’s a fun song and that’s what makes me love it so much!

I will say this and I swear to goodness that I don’t take this lightly, but I seriously LOVED this album like wholeheartedly! Every song was so good. There wasn’t anything that I can pinpoint that I hated and wanted to change, and that rarely happens to any of the albums I listen to! If I had money and obviously a stereo system, I would buy the album and listen to it proudly on full blast, that’s how much I loved it!

Have you heard of Zayde Wolf’s “Modern Alchemy” yet? If so, what were your thoughts and favorite(s)?