Last October, when I stayed at my mom’s work while she recovered from her second surgery, my nana and I got to have a lot of fun together and one of the things we both got to enjoy was a theme dinner there at the nursing home.

Gail who works in the activities department explained to us that they try to have four different themes in a year. She and the other girls decorate the different dining rooms and they plan with the chefs of a meal that would go with that particular theme. The one I got to enjoy was “Serenade At The Seven Seas” or something like that. I liked it. I also loved trying the different courses, but the other ladies were a bit mixed though!

The theme was called “My Fair Lady” and I guess the ladies in the activities department decorated the dinning rooms and made feathered hats or “bonnets” for the female residents! She took pictures and even wrote out the menu of what they served to the residents! I was going to use the one she made, but it had some spelling mistakes so I just redid it – later I realized I could have spelling mistakes on mine! Funny how they works!

They also had a little tea party too!

According to Gail, in the film a couple of characters host a party and they decided to recreate that with the residents, so they decorated the large activity room with very pretty and colorful table clothes and had these beautiful centerpieces in the middle of them. They looked very vintage but yet modern too! They also made the ladies hats with feathers and ribbons in crafts. My nana really loved that, but as you can see apparently so did Alex! 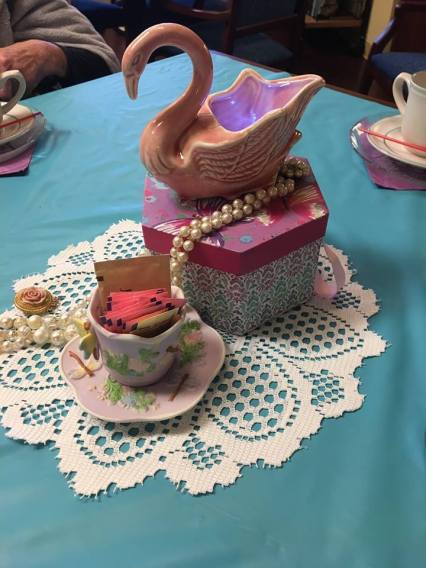 In 2016, I actually wanted to have an afternoon tea themed birthday party. I had so many ideas that I wanted to do. I wanted to decorate my grandparent’s kitchen table with different fabrics, and since my birthday is like the day after Halloween, I knew my nana had a large black table liner and I thought if we put that on the table itself and laid out a red runner in the middle that way it wouldn’t look too dark and gloomy for the party!

Over the course of the last two years, I’ve actually wondered what I’d serve to this tea party if I ever had one! Since I read so many of my fellow blogger friends going to afternoon tea at different hotels or just plainly at home with their family members and/or close friends., I’ve been able to figure out what all is served, and I’ve grown to love the three teared stand of food that is laid out on the table. The first thing they give you is your tea. However, I’m like the 1% that doesn’t like coffee or tea, so I’m more interested in finding a good lemonade recipe. My mom actually made a homemade strawberry lemonade last year, where she let the strawberries sit out in the juice overnight to allow the flavors to marinate together. I’m kind of partial to anything raspberry, so whenever I see a “raspberry lemonade” on a menu at a restaurant, I instantly order it! So I’d rather have a raspberry lemonade instead.

As much as I’ve gathered, you usually start with the sandwiches, they are usually placed on the bottom and bigger tear. The traditional flavors are egg salad, smoked salmon and cumber all cut in small bites so they look more dainty, and they always have the crusts cut off! Now I look on Pinterest for other ideas to make this a little bit more casual, so I am curious about creating a sandwich or two as some kind of wrap or pinwheel–using the traditional plain tortilla or having a variation of spinach or whole wheat!

On the second tear you had the scones, which apparently in the states we say the word completely wrong! I’d explain on how it’s really pronounced but I don’t even know how to describe it, so I apologize there.

I have actually seen quite a few of my favorite chefs make scones on their television programs, so I already know of some different kinds I’d like to try out. I also know that when you’re making them for the first time, they’re suppose to be crumbly, so there’s nothing wrong with them, that’s just how they’re meant to be! Ree Drummond created the Maple Oat Nut Scones after not being able to visit a Starbucks where she lives; they look really good! The way she described them on her show The Pioneer Woman they taste like a biscuit type of pancake, because it has a strong taste of maple syrup! However, I think I would have to keep the coffee out of it! And then there’s a Cheddar and Dill Scone recipe from Ina Garten, she’s made this with both cheddar and a Stilton, which is like a stronger blue cheese! She’s very inspired by French food and had a gourmet food store back in the day, so she’s figured out different ways to make a good savory scone!

Now the real question is what would I do about the clotted cream and jam that they serve alongside the scones itself? I know we don’t have the traditional clotted cream or nobody makes it to that level as the British, so the next best choice to have would either be mascarpone or cream cheese! Personally, I’ve never been in jam or perseveres, so I wouldn’t necessarily put it out as an option if it was only me, but if I had a group of people, I’d probably get a small jar of strawberry or blueberry jam, but for those who want to be really adventurous they can try out the marmalade. You know, I love the smell of that stuff because it’s like oranges, but I have never tried it before and if it was put out there on the table, I probably would like to try a small dab of it.

As far as the top layer of the stand, my thoughts have differed, sometimes I think a very casual take on decorative cupcakes would work out very nicely! You could make minis so they’d fit on the tear better. However if you wanted to add a fun twist to them, like stuffing them, it wouldn’t necessarily work on the tiny ones. I’ve noticed I keep looking into French pastries. You’d think I’ve been watching too much Ina Garten lately! So the possibility of having macrons, which is something that is on my food bucket list (yes, I do have one those! I actually need to work on that soon!) and there’s the tarts or tarlets you can make, like the Mini Raspberry Tarts that Julia Baker made on her TV show! These were so cute and seemed really easy to make! If you’re a chocoholic, in which I sort of am, you need a couple of good chocolate desserts too! Truffles would be a good idea, as you can just eat it in one bite! You could dip strawberries in chocolate or make little pote de creme (puddings!) in mason jars too.

There doesn’t seem like there’s a right or wrong way to create your own afternoon tea! If you’re interested in learning and seeing what is actually served at the teas in the United Kingdom, I have compiled a list of favorite blog posts for you! I hope you have enjoyed this post!

Have you ever attended an afternoon tea before? If you have, what was it about it that you loved the most? For those of you who haven’t, have you ever been tempted to create one yourself? Let me know in the comments!

5 thoughts on “What I Love About Afternoon Tea!”