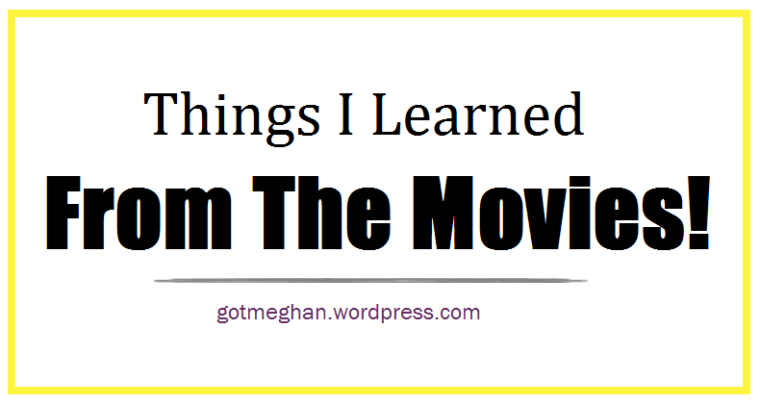 Today’s post was inspired by the trending hashtag: #ThingsILearnedFromTheMovies on Twitter that appeared back in January! Once I saw it, I look into the answers people were tweeting and after finding some clever and very hilarious answers, I ultimately decided to turn it into a blog post!

Movies are my favorite pastime.

I’d rather watch a movie early in the morning than late at night. It’s also a great time of day to work on blog posts too! I think maybe it has something to do with the fact that I’m more relaxed and/or in a good mood around that time of day.  Everybody is generally still asleep, so I know I can’t have my TV up too loud. If I were to watch a scary movie, I could potentially scream or if I watched a comedy, I’d be laughing my butt off so I’ve learned to only watch drama or action flicks!

I’ve learned that movies only show you things that you need to know, and I feel the 1985 classic Back To The Future is the greatest example I can give you! Dr. Emmett Brown (Christopher Lloyd) is a scientist that has built himself a time machine with a DeLorean alongside a stolen crate full of plutonium. He shows it to his friend, Marty McFly (Michael J. Fox) and they record their first attempt to send somebody to the future: enter Einstein the dog! After the Libyans come to slay Doc for tricking them, Marty tries to dodge them by going into the car and it takes him back into November 5, 1955!

You really need to pay attention to every scene of this movie, because everything ties in together! When Marty walks into Doc’s home in the very beginning. He realizes the mess on the floor of the dog food piled up in the bowl, and he puts down his skateboard and he pushes it back with his heel and it hits the yellow case of plutonium. This is your first introduction to something a little fishy!

To the scene where his sister tells him that Jennifer Parker has called him and his mother and sister have a conversation about which way is the right way to meet a guy, and you start to hear the story of how both Lorraine and George met and when Marty goes back in time and sees the younger versions of his parents, he changes the story he’s heard all of his life!

And then finally when Marty is about to use the lightning storm to his advantage to go back home, he writes a letter to the younger Doc about what is to occur on the date that he sends Marty back to, so that he can at least prepare himself but unfortunately Doc discovers the note and rips it up. However, you can see him putting the pieces directly back in his pockets of his jacket for a split second when the tree branch falls down, so that basically tells you that later he finds the letters and puts them back together and when Marty watches his friend get shot again in the future, Doc suddenly awakes and sits up to show Marty the bullet proof vest hidden underneath his white suit.

However sometimes movies like to keep their audiences guessing! For example 2016’s Arrival with Amy Adams and Jeremy Renner. The story starts off with Amy’s character Louise, who is a linguist, divorcee and sadly her daughter Hannah has just died from an illness. In the beginning, it shows the fact that Louise cherished and obviously misses her daughter very much.

And then these space ships appear all over the world and she is given access to help figure out why they are there so she is given a team with Renner’s character Ian, who is a physicist and they embark on the upper level on one of these ships to try to communicate with them. They try a number of symbols and codes to see if the aliens understand them. Gradually, the relationship between both Ian and Louise grows and as they continue to study the two aliens that they ultimately name “Abbott” and “Costello” they finally figure out their language or symbols.

When asked about why they were there, they answered “offer weapon” but another research team in China mistakes it as “use weapon” and they want to take down the aliens and their ships for good. Louise doesn’t want to stop, she wants to learn more about the answer she was given and they try to explain to her that they are here to help humanity and they make Louise realize that the thoughts of Hannah and memories of her younger life and eventual death are not what they seem.

I learned that not every extraterrestrial inspired film has to be the same! We’re so used to watching the normal “world destroyer” type of movies, that we think that would be the best way to handle aliens if they ever showed up on the White House lawn! For the ones who enjoy the Star Trek TV show and movies, hope they are welcoming beings, who want to share their advance technology. This film showed the theme of aliens and the word “weapon” in a different light. It wasn’t as jam-packed with action but it was very interesting on the fact that we’ve been taught to fear them of what they could do our world, but I think we think we’re causing enough destruction to ourselves that they don’t want to intervene.

What are some lessons you’ve learned from your favorite movies?