Before I was hit by the flu in early January, I actually had a mini getaway. I stayed with a friend of mine. Afterwards I had lot of plans to get back into blogging right away. Well, not at the moment I arrived home because even I know I need to let my body rest for a couple of days before I actually got started on anything! I just didn’t know my body needed three whole weeks to get settled back into my normal routine.

Over the NYE celebrations, I went to hang out with my friend Brittany. You might remember her as she and my family, plus a few close friends knew of the surprise of a lifetime. She’s the one who took me to see Shinedown and Five Finger Death Pinch in 2016. She invited me over to her house for the weekend, to hang out with her and her Great Dane Lizzy Lou and cat Gravy!

We did a lot in those two days. We went out to eat twice–both places we love! And we went to Lowe’s, which was absolutely hilarious! We started out with her pushing my wheelchair while I had a hold of the cart. We realized this wasn’t really working so she went on to pull the cart from the front and I grabbed the bottom rail that connects the wheels together. The only way I can explain to you what I was feeling was like surfing, just without water! It was fun, I almost hit a couple of displays but I didn’t fall out or break anything in the store! 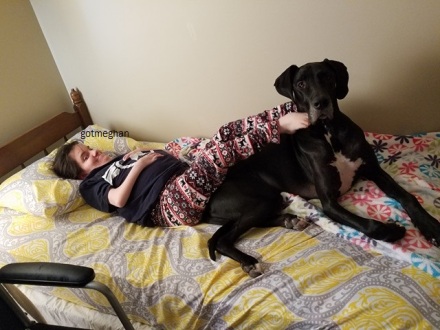 She knows I’m always looking for a good time, so she found an opening at Painting With A Twist that was $25 for one person, unfortunately it was too expensive for the both of us, and she said she didn’t want to do it, but honestly we cheated a bit because she had to help me a few times so I feel she participated too! I had never done this before, but I’ve seen it on TV and seen the many, many pictures on their Facebook page. If you’re not familiar with it, it’s a place where you go to paint and drink wine. So if you go to these “parties” you have to over the age of 21, but the one we went to was providing coffee instead so we had younger girls in our group. One of the nice things about it is that everything is already there for you to use, you can wear an apron to protect your clothes, and they provide you with canvas, paint and brushes.

After we left Lowe’s, she called them to make sure they can accompany to my needs, because we were both worried about the height of the tables. I was very short in my wheelchair and I didn’t want to have her get me out of my chair and onto the floor–I didn’t feel like breaking her back! To say I was worried is a bit of an understatement. When we got there, they let me try out the smaller easels that they have laid out on the tables already, and this was too low to the ground for my foot. Luckily they had another option and brought over a bigger easel and this was a good fit. I felt like Goldilocks in a way, because I was trying many ways to be able to get this to work.

Our instructor was Ryan, he’s also the one who helped the two of us in the beginning. He was very nice and easy to mesh with because I used to go round and round with my old art teacher in high school, we hardly ever agreed on things. I liked him, he was one of my favorite teachers but I think even he would say I didn’t listen very well! Anyways, he explained the different hand motions we should be making to be able to cover the canvas with the paint. He said it didn’t matter if it was too dark or light, and to take a few steps back to make sure everything is to your liking.

The design that I did was a peace sign on a pink background. I was asked if I wanted to stick to the original background or if I wanted another color, I don’t know why I chose to stay with the pink but I did! There were like seven of us in the room and only two of us kept the pink, while most went with both turquoise and purple. We had only one yellow!

As we waited for the paint to dry after we put on our background color. We took a short break and played a game of guessing how many corks were in this giant wine glass! We were given a paper plate and I had said 36 because it looked less than it was, and Brittany suggested it could be like over 300 of them. Well, it ended up being around 600+ wine corks in this glass! We were all shocked and depressed at our math skills! The winner was allowed to pick out a painting from the display on the outside of the room. After she came back in with the one she liked out, we started on our actual peace sign.

I’m one of those people who have to go bigger than the normal person apparently. I can never do anything small and delicate. We put the random yellow swishes on the left side corner and apparently I had a little bit too much fun. One of the things that Ryan had mentioned before we started was this is an easier design because you’re freeforming it rather than painting in the lines of the subject as we were told were how the other paintings were created, which makes sense considering I’ve seen a LOT of good ones and its easy to forget that the people who were doing them could had a lot of wine at the same time.  I can’t use alcohol to my advantage for my craziness!

Once we drew the peace sign on there with our pieces of chalk, we started painting various dashes around our outline. Another example of my “go big or go home” mentality I had that day! After this, we left it to dry and then we moved on to the splattering effect and he told us to put our canvases down on the floor. He said to get the paint brush really wet with water and then put it into the black paint and constantly go back and forth until you get this runny paint on the bristles, and he said to tap on the handle of the brush on the areas where you want the splatters to go, but while I was trying to do this, my wheels kept moving at the same and I was close to running over my canvas three times! Brittany actually had to help me a bit because I was having a hard time staying straight in my wheelchair. I will be happy when I get my new chair! I will say her splatters were the bomb and everybody agreed too!

Brittany had to do the drying parts for me, because I bet I’d probably break a blow dryer! I’d either run over it or drop it on accident, either way I would have like crap. After she came in, we had another break and we played a new game too.

This one was interesting because we used the paper plates we were given before and we were asked to close our eyes and draw out different things that go with NYE like a party hat, wine bottle and a glass. I could reach the top of the stools that everybody sat on, so I put my plate up there so I could participate in the game. Next time when somebody suggests to help you hold things there, just do it! Don’t pull a Meghan and mess up. However, I did a decent wine glass! Ryan said once we were finished, that he tends to give out two prizes for this game: if you can tell what it is and the hot mess. We had a couple of hot messes, even the girl who won that category agreed with him, but I won the other one. Brittany and I had went around the whole place beforehand and she had already expressed which one she had liked and lucky for the both of us, I used my “winnings” to her advantage and she got to take it home! It goes great with her color scheme of her living room.

Once we were finished with the whole thing, the canvases got one last blow dry and we washed our hands of the acrylic paint. I didn’t make a big mess of myself or the floor! My nana would have been shocked about that! We were given these giant brown paper bags to pack our canvases into as we left, but first there was picture time! We had the group photo and then Brittany put me into between the two designs that had Ryan already did for the class.

Now every artist has to name their project. My Linkin Park drawings I did in 2010 are called “The 6” because it was six portraits with close to six different mediums. So I named mine a little bit later, after Brittany and I realized something different about mine, and I was going to share that part with you, but I think I’m just going to post the pictures and let you see it for yourselves.

Since we had so much fun that day and our hopes of taking a nap that afternoon never happened, we didn’t make it up to midnight. We were sort of dragging that Monday morning when she dropped me off, but we’re both in agreement though that we’re waiting until it gets a little warmer but we had a freaking blast! Hope you enjoyed this post! 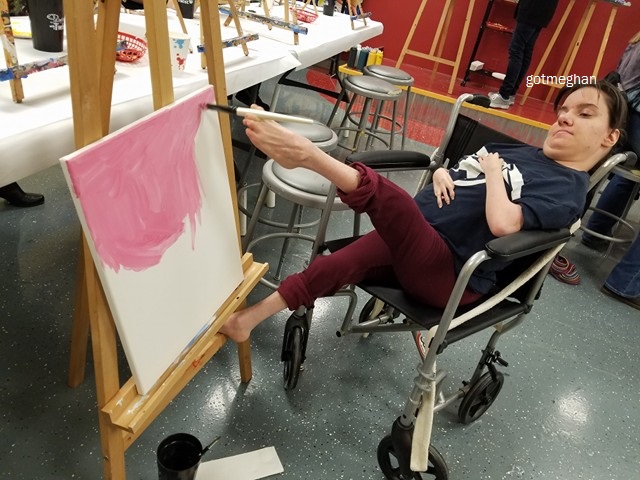 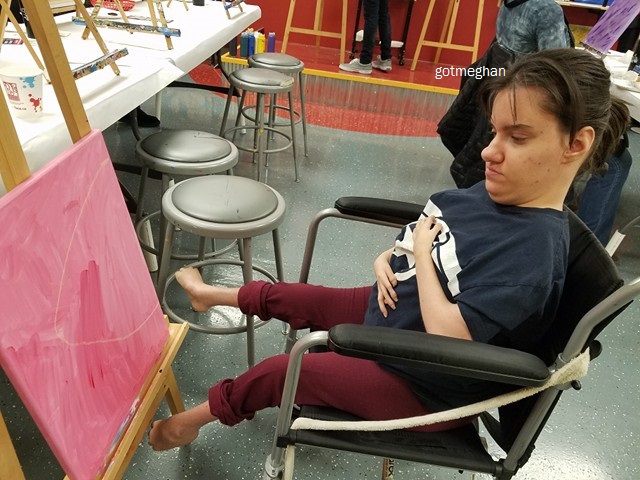 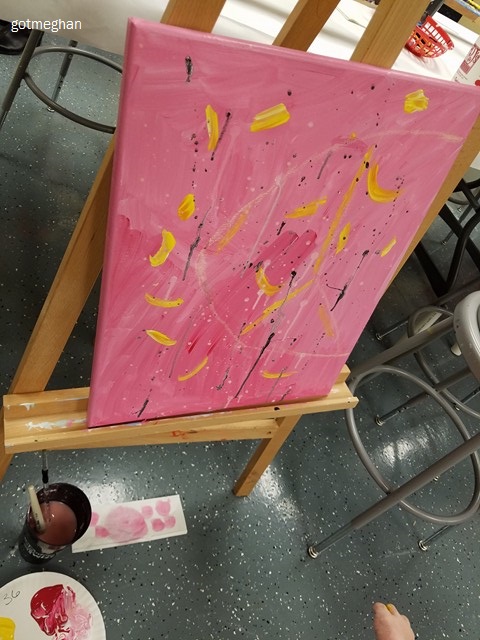 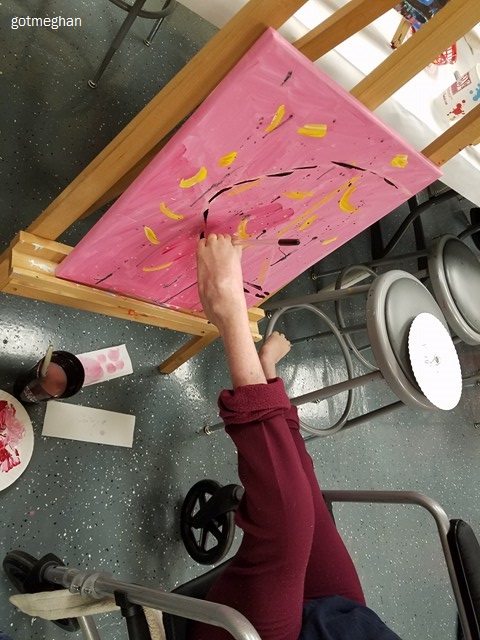 Have you ever done anything like Painting With A Twist? Even if you’re not a “painter” I still recommend that you go and check it out anyways!