I thought this topic was appropriate since everybody has decided on their new year resolutions. Most people put “lose weight” on their lists because it’s something that is important to them and if they’re tired of looking at themselves in a certain way, I believe everybody has the right to do something for themselves, it’s not a selfish decision at all. If they admit that it’s time then they should be able to take the whole twelve months to figure out how to lose the right amount of weight to make them happy!

My weight is another story though.

When I was busy having my surgeries years ago, it did become a bit of a struggle because I was so small. They wanted to bulk me up. I didn’t have to drink those disgusting protein “milkshakes” right away, the gap between my second and last surgery was pretty short, and I was really low on my weight so I think I had to drink two of these drinks a day for a week. Once I was home, I never had to drink another one of those again. However, when I was really sick my doctor recommended PediaSure because again, I would get very skinny because I wasn’t able to keep any food down. I think I tried both the chocolate and vanilla. Surprisingly, I liked the vanilla better! I’m hoping they taste better than what they did in the early 2000’s!

Now that I’m an adult and over 80lbs, I can get pretty down about my weight. I’ve never really had a problem with it though. It wasn’t until after I got out of high school, when I was being left out with my “friends” so I began to blame my weight and on top of that, my disability.

When somebody you love is attempting to lift you up out of bed or into the car and they grunt and grumble with every movement, it can get you down very easily. Every one of my family members has some sort of aliment. What’s interesting is that I don’t have the same strength I used to have before I had my surgeries. I used to be able to get on and off the bed without any help. I can still get myself down and we’ve learned to do pivot transfers which has been very helpful so hardly anybody has to really lift and/or carry me to an area. I think I’m scared of getting any bigger because I don’t want my legs to give out on me.

Now I know, it had nothing to do with my disability, but my weight is still at the forefront of my problems. I am noticing different areas. My waist and what my mom calls them “fat rolls” because I am constantly having issues with my pants, they’ll get twisted and pinch my skin underneath this patch of fat and skin. When you’re not able to untangle them yourself, and when it happens at night where everybody else is sleeping, you feel kind of hopeless. One of my least favorite places is my chin though. I definitely have a double chin and I absolutely hate it.

I’d like to find a balance in my weight, because I don’t want to be under 60 lbs and have a bad immune system. So there are a few things on Pinterest for people with disabilities to do in and out of their chairs and I wanted to include an example for yoga, so you can stay in your chair. 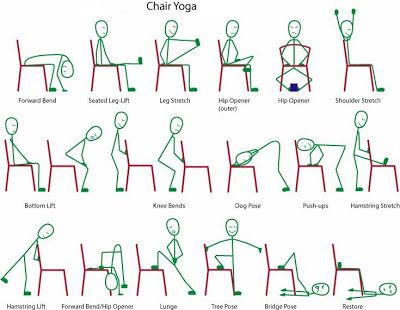 And then of course you have YouTube, where you can visually watch somebody else doing it in front of you and you can make sure what you’re doing is right too. Honestly I think watching them on YT is better anyways, so you can feel comfortable with it, before you actually do it.

This is a four minute workout you can do.

And this one is a little longer workout that I liked too.

If you have a disability, what do you do as far as trying to lose weight? Do you have any good tips that you can share below?