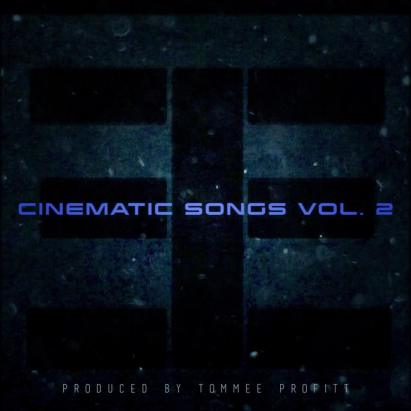 Okay, so I know this isn’t anything to do with Christmas, but I wanted it up before the end of the year.

Back in February, I reviewed Tommee’s first collection of cinematic songs and I thought it was a big hit. However, in the mist of everything going on in my life this year, I seemed to have forgotten about the possibility of the second volume being released sometime later this year. It wasn’t until two weeks ago that I had the thought “oh, I wonder if he’s released anything new lately?” and  sure enough I went on Spotify and there was the next 13 tracks for volume two. Believe in your gut guys, when it starts telling you something listen to it, even if it’s something such as this!

I think this batch came out several months ago, because Tommee’s newest song “Your Love Awakens Me” came out in July, so there’s a big chance it came out around April and I’m sadly just finding it now.  Since I reviewed the last one, I have decided to talk about this too.

If you don’t know what cinematic music or epic cinematic as its usually called, is music that sounds like it belongs with an advertisement of a new movie, TV show and/or video game. The themes cover loss, love, hatred, breakthroughs, and war. The music itself has both symphony incorporated with some pop elements here and there, but it’s mostly hard hitting and can also sound heartbreaking too.

We start this with a song called “Hero” and it features singer Mike Mains and he originally makes indie rock music. I like how some of these artists that don’t usually create music like this on a daily basis are getting out of their comfort zones. I loved the slow start and the gentleness of it. It fits well with Mike’s soft voice, however, I think there is some rock elements in this song, especially in the heavy sound of the drums towards the end. Everybody knows I love a good start to any album and this nails it. Next, we have “Tomorrow We Fight” and I loved how this song made me think of my story I’m writing–this is what the genre does to me! Anyways, we have a very ominous beginning but you get that war theme right away and it’s strong. The sound is very light, but artist Scvrina also brings that out in her vocals too.

Third is “We Runnin” that features Beacon Light, who is a Christian rapper and I really, really enjoyed this song. Tommee didn’t feature any rappers on the last album, even though I know he had worked with NF so I’m happy as a clown to see him put this artist on this collection. The song has a playful vibe to it after the verses end, and the beat drops. I actually enjoy hip hop cinematic beats, I think they’re fun and energetic! The normal cinematic sound isn’t as prominent in this track but I don’t mind it. I actually don’t like the ending of it, I feel like going into the climax is too much and I think it should have just been him ending it in the way it started. The beat itself was interesting without that part in it. After that is “Shoot To Kill” and the artist included is Quivr and I’ve had the worst time finding anything about this person. Sorry. The song itself is very mellow compared to the others which is good because you don’t want every song to sound so big and powerful, even though that’s what everybody looks for in this genre, so I do enjoy the change in tempo.

Next we have “Breathe” which features a singer you might’ve heard before, as she was included in the last one: Fluerie. I actually recognized this, because it was released back in July. I feel as though that should have been my warning that something was up. The quiet introduction with only the piano and the gentleness of Fluerie’s voice is just beautiful. It is so dreamy and mysterious all mixed up together. It’s everything that I love really. One thing that I actually liked about the first album was the amount of instrumentals, there were only like three tracks that Tommee made but I thought they were all unique even though I kind of prefer the ones with different vocalists, so the fact that he only has two instrumentals on this album was a little sad, “Gambling With Fate” is really good, it’s not in your face from start to finish, but it does grab your attention and I actually liked it for that mellow vibe I got from listening to it.

We go back in the war related theme with “Ready For War” with artist Liv Ash, this is another mellow sounding track, but I feel like Liv’s strong but deep voice is an interesting mix. I think it is a perfect medium to her voice, it’s not overpowering like the end of track number three. It’s not bad. I felt as though with the next one sounds like a Halloweenie song, because the spooky organ in the introduction. I thought that was so strange considering we’re in December now. This is called “My Domain” and it features Scrvina again, and it has a more urban, pop feel to it than a fierce cinematic song. However, I don’t hate it. I think it’s different and makes you think twice of what this genre should sound like at all times.

Next is “Heart Of The Darkness” and if you liked the first album, you might remember the featured singer on this track: Sam Tinnesz. I was so happy to see him back on the second collection! The song itself is very light, it has a bit of a pop feel to it. So in a way, I was a bit disappointed but then again I started to enjoy it the more it continued. The tenth song is “Turns You Into Stone” which I thought was an curious title when I first saw it. This features Miss Fluerie again and it has a little ethereal feel, but I feel like that’s become like a calling call for her. She’s like a damn siren, you just want to hear everything that has her on it and this isn’t any different. However, I think you can hear that voice of hers better in this song than the others I’ve heard this year.

The last three songs, start with “Undefeated” and it features Beacon Light again. I was glad that Tommee actually gave him hip hop beats to rap over, it just gives the listener another level of the genre. I really enjoyed the beat drop and I was so happy that his didn’t have to scream over the orchestra parts at the end. I will say though, I think I prefer the first track, but I don’t know I’d have to hear a few more times before I really make a decision. Next is “Hold On For Your Life” and it has Sam Tinnesz on it. This has a really somber, almost dreamy vibe in the beginning. It definitely brings out that loss theme in the lyrics. It’s a gorgeous ballad, if we should put it into that category. The last one is “Moonlight Sonata Mvt. 3” and Tommee had released this back in 2016, but he added it here as a bonus track. It’s a classical piano instrumental but it has that touch of cinematic magic added to it, and it sounds very cool. I’ve always thought pianists that can play that quick are geniuses. It also makes me wonder at one point of time could my papaw do the same thing?

By the time I finished listening to this album, I had stopped kicking myself or my this case wanted to stop kicking myself for the fact that it took me so long to find it. I still feel like crap, but hopefully that’ll go away soon. Anywho, the second album is a good rival to the first. I am loving all of the new singers that Tommee featured on here. If you didn’t know, majority of the artists included on his songs are Christians and can be from around both Michigan and Nashville. So he is bringing out artists that you may not have heard yet, because people just assume that gospel/worship is boring, but in this type of enlivenment you can’t tell that they identify themselves more in that category of music. Same goes with the ones from Nashville, not all of the musicians that come out of that place want to be country singers. Keep your ears and heart open to new music everyday folks!

Have you heard of Tommee Profitt’s “Cinematic Songs Volume 2” yet? If you have, what are some of your favorite(s)?