So I have some news…

Blondie and Brandon are pregnant! As I announced on Twitter back in October, I’m going to be an aunt to a non-fur baby! The reason why I said it like that was because the way Blondie posted it on her social media accounts was a picture of Otis, Toni, Gru, Samuel and Chipper’s front paws and the last one were the two strong lines on the pregnancy tests! 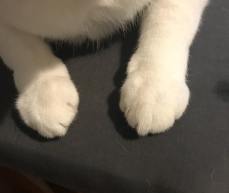 The day she did it of course was kind of weird. She texted me because she couldn’t reach mom, as she was doing laundry at the time I think, so she was distracted and for once I actually could read her message (my phone has been a bitch lately!) to have mom call her and it was so strange I kind of felt in my gut that she was calling to tell us she was pregnant. I’m not joking or saying this for the blog either! I get these strong gut feelings sometimes.  When mom finally did call her and they talked for a couple of minutes, and she came into my room to put her on speaker and I instantly knew that I was right. However, I think I was so in shock that I was correct that I didn’t necessarily know how to react or what to say to her. I actually started laughing because it was the only thing I could do.

We were told not to say anything, but um… mom made the mistake of telling our dad while he was over at our neighbors and he just automatically told all of them that he was going to be a grandpa! So any notion of keeping it between family members on both sides was kind of out of the question at that point!

It’s been a whole month but the reason why I waited was because I wasn’t exactly comfortable in coming out and stating that she was pregnant on here just yet. The only reason why I can say it now is because on the first day I wrote this post which was Nov. 8th, she went to get her blood worked on and got some tests done and they were the ones that told her that she was “very” pregnant. I know, that when a doctor says that she’s just making sure that she was right and that she is with child, but as soon as her that, I thought to myself, it almost sounds like she”s having twins. In my defense, everytime Blondie has kids in my dreams she always has two: a boy and a girl. Same goes with our cousin Kristi, I’ve always seen a boy with her, so maybe I will be right again! 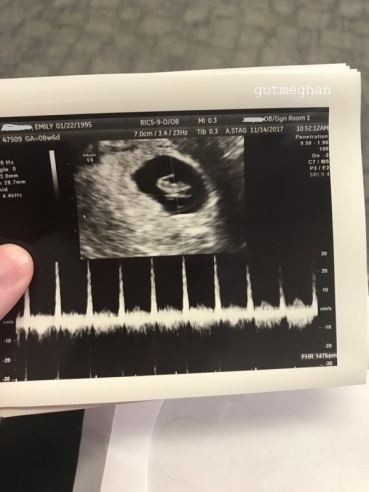 She went to her first baby appointment and the little “nugget” is doing good! Blondie was wrong at how many weeks she was, she was seven weeks at the doctor so she is nine weeks when this post goes up! Our mom figured she’d have it in early June around papaw’s birthday, which would be really sweet since she was so close to him, but now it’s been changed to July 4th, but like I keep telling myself, he/she can make an appearance on June 30th too, which is Arthrogryposis Awareness Day! I’m gonna buy a newborn onesie in blue just in case! Anyways, in this last picture I’m including above everybody thinks he/she looks like an alligator or a shark, but Blondie and I don’t see it. I think it looks like a bite size nugget if I’m being honest!