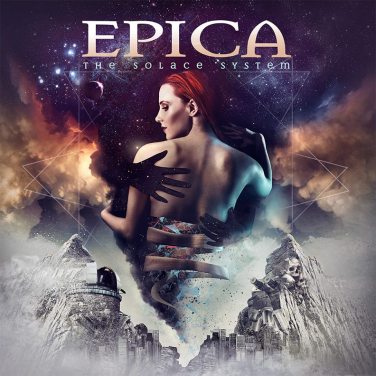 I love Epica. If you’ve never heard of them, they’re a symphonic metal band hailing from The Netherlands, one of my favorite places to find great music especially in this subgenre! There’s six members of the band: Coen on keys, Ariën on drums, Rob plays bass, Issac plays rhythm guitar while Mark plays lead and does the harsh vocals and Simone is the main vocalist of the band.

They are one of those bands that I have a really hard time getting interested into after so long. I loved their 2014 album The Quantum Enigma and I will even go onto saying that it’s one of my favorite albums of all time! However, this was the only album I’ve managed to like from start to finish. When their recent record The Holographic Principle came out in 2016, I wasn’t able to use my Spotify so there were a lot of albums that came out in that timeline that I never got to listen to.

So let’s start on this…

The first song is the title track “The Solace System” and they have a very interesting music video for this song on their YouTube channel. I was glad that I checked it out because I didn’t even know they were even releasing an EP! I was expecting the songs to be in the same themes as their previous album, they seem a bit outlandish but it’s really not bad. I love the shared parts between Mark and his growl-y voice to the choir in the background in the verses. Simone’s voice seems very tamed in this song but I kind of like it though. It’s very heavy though, you hear the guitars and metal aspect of it a lot stronger than the more symphonic sounds. For any skeptics out there, you could actually convert using this song! Next is “Fight Your Demons” and anytime you have this kind of title, I’m always hoping for a heavier type of track and thankfully you get that, the introduction was enough for me! You know that I don’t always follow the lyrics in the beginning but I really like the meaning in this song.

Third is “Architect Of Light” and I’ve seen a lot of praise for this track. The symphonic metal community is basically in love with it, which makes things more interesting! I really love the title so we’re getting there! I absolutely love the intro, those horns sound so cool! I am a bit speechless. The other songs were metal based whereas this one allows the orchestra to shine. It’s powerful but it still has those gritty moments brought by Mark’s voice. It’s glorious! It’s definitely a favorite but now we have to move on to “Wheel Of Destiny” and we have another very fast paced song, which in a way goes with the title well! I like Simone’s low voice in the verses. I really like it a lot. So there’s another favorite in the making!

The last two songs start with “Immortal Melancholy” and have I said how much I love these titles? They’re so mysterious and I really like not knowing how each song may sound until it actually plays.  It makes things interesting! I’m glad they put a slower song on this, I think their music is pretty brutal but I do love their softer ones just the same because it’s a nice balance to have, plus Simone always does a fantastic job of controlling her voice in the ballads. It’s very beautiful and not what you’d really except from a heavy metal band. Last one is “Decoded Poetry” and once again, brilliant title! We’re back to the normal sound of Epica, and it seems that it’s only Simone on vocals but thankfully towards the end Mark does make an appearance which made me really happy! There’s a small section that is just beautiful, The band stops playing and all you hear is a choir and the orchestra and it’s a beautiful piece and then all of a sudden, the guitars come in harder than ever and I really love these songs! They’re always so fun for the listener because it’s so many elements at once. It’s great!

I really liked this considering I’ve only heard about three songs of their previous album. Now the real question is, am I inspired enough to go back and listen to it? Not yet, but I’ll never really put off my radar forever because I know one day I’ll be in a big Epica mood and will want to discover new songs from their rooster.

What do you think of Epica’s new EP? Have you heard of any new symphonic metal bands lately? Let me know please!