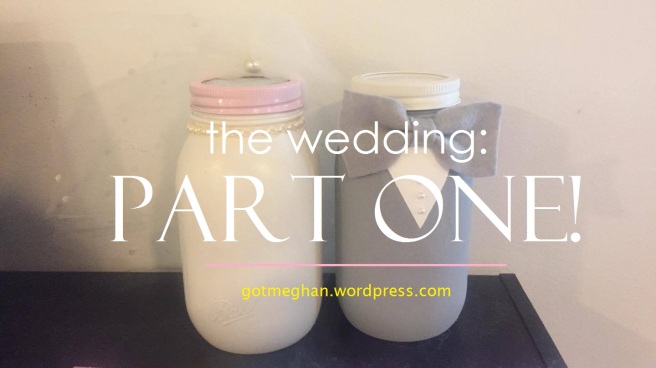 In my last post, I thought that I wouldn’t do the full four posts like I had wanted because of the fact we didn’t take very many pictures on Friday, but then two days later I realized Blondie did in fact take pictures of the layout of the reception area and decorations. Unfortunately, I had asked too late because she had just deleted them! I was bummed because they were literally my last resort, but she was in the process of trying to put up the decorations for sale on the barter pages. So she started sending me those pictures instead that way you all would get an idea at least!

Thursday was the day where Brandon, dad and the other groomsmen were to get their tuxes and I thought I heard a lot of complaints of women thinking their garments weren’t going to fit them correctly–myself included–until I heard my dad worry about the fact that his pants would be up to his ears! I had to exchange the word because that’s not all of what he said! Blondie went with these two and took pictures. According to her, poor dad was yelling across the stalls where they were changing to Brandon because he didn’t have a clue how to put it on! I thought it was cute and sad all at the same time! This was seriously the first time we’ve ever seen him in a tux so when mom got the pictures, I was in shock but also a bit impressed on how much he was willing to do for his youngest daughter! 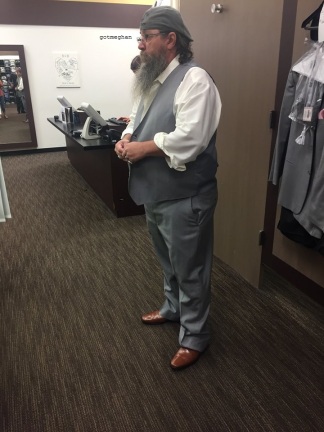 Friday was the day of the rehearsal! This was the day that dad was the least looking forward to and he complained majority of the time!

We started the afternoon going to the reception room and putting up some of the decorations! The tables and chairs were already put out when we got there and there was a massive gap between the bridal party, dance floor and the guests tables. Blondie was told they were like that for in case of fire, but it was a huge amount of space! Anyways, when we first got there I was allowed to roam in my chair which I relished in I’m not going to lie. I needed to see how much movement I would be able to do if this was where we were going to party. I also had a secret agenda too, we weren’t exactly sure how tall these tables were going to be so I could feed myself  and we needed to know if I was going to need the thick book I use whenever I go into the living room! Apparently our loveseat is higher than my bed! I rolled myself over to my seat and it was a perfect fit! Blondie placed my straw inside my glass before we left too!

Jace and Dyllanne were there to help out. Sam came later once we were finishing putting the lights on the tables. Brandon’s mom bought the table decorations, they were just simple things which is what Blondie wanted so it wouldn’t be so complicated to take down after everything was over. Once I inspected my seat I began to roll myself back over to the stew of boxes and I told Jace to place the bigger candles inside an empty box so I could place them on the bridal party’s table. The bottles were at the edge of the tables and I figured I was able to put them up there or somewhere close. I was thankful that we were the ones that did this because I decided to wear the same dress I wore for the bridal shower so I had my legs up in the air a lot more than I realized but hey, I wanted to be of good use. 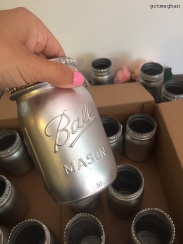 Every table got one candle and mason jar with a bouquet of flowers on top! We had to do some rearranging at the last because we had twice as many flowers and jars than tables so we switched out some of the original flowers in the bottles and exchanged them with the brighter pink ones.

After we were finished and we had added our fourth bridesmaid Jayde to the fun, we went to the church where we were sat and waited for at least five of the groomsmen! There were only two of them there at the church and roughly half of Brandon’s family sitting in the chairs. When we got there, we met up with Alli and her younger sister whom I haven’t seen in a really long time because she’s now in her teens! Thank you Shelby for making me feel extremely old! Ten minutes passed and the last bridesmaid Skyela had arrived but we still only had two groomsmen. Within 20 minutes later, not only did my dad fall asleep in the chair and slightly bonded with Patty and Will, I saw two gentlemen. One was really tall and that was Jordan and the other was Isek about five minutes later I saw a familiar face! Allen (best man), his brother Alex and Lance came walking through the doors. We were all there now!

We started with getting lined up by Blondie and at this point she had turned into a royal bridezilla. Since Allen and I had the good spots, we were the last ones before the flower girls and ring bearers. While we were practicing going down the aisle, Allen and I decided to have some fun and we did some pop-a-wheelies. I’m still surprised we didn’t get scolded by dad or Blondie by the second time around! It was hot as hell in that church so if we didn’t have any fun, somebody was going to pass out! And yes, that’s my excuse!

My mom and I were originally going to spend the night at Blondie’s while Brandon stayed at the frat house with the groomsmen, but once we were finished with the rehearsal it was super hot and both of my folks stomach’s were sour so we ended up going home while the stuff we had brought with us stayed at the apartment. I had to sleep with my childhood pillow which is flat as paper and two fleece blankets that weren’t long enough to reach my feet! I wasn’t exactly thrilled but it ended up being a good thing in the end! Everybody else went to the rehearsal dinner at Wings & Rings and Blondie had fun with her girls from her ISU days!

Next week you’ll finally get the details of the actual wedding day!