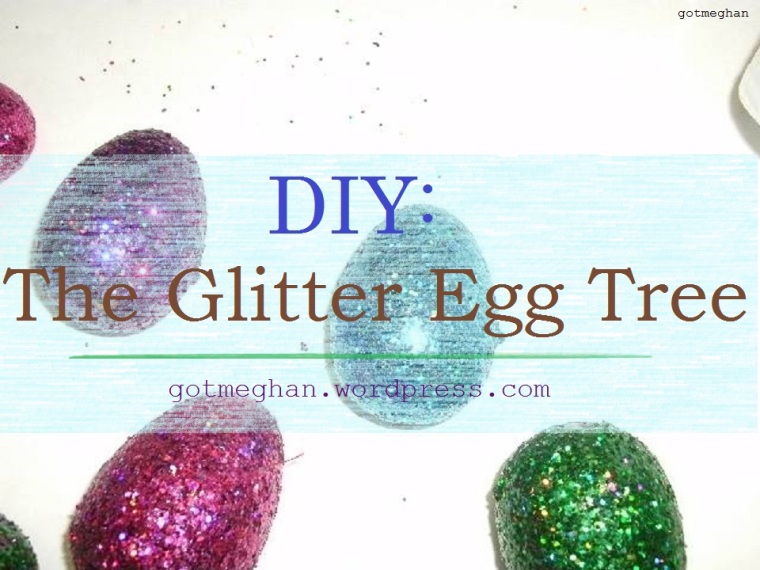 If you remember the previous DIY post about the plastic egg wreath we made, a couple of weekends later my Aunt Laurie came down with more plastic eggs and fake grass to do another project I found on Pinterest (that I can no longer find) around the same time I found the first one. My nana wanted to do the wreath, whereas I wanted to do the egg tree craft! I need something bright and a little bit obnoxious in my room so I thought this would be perfect! 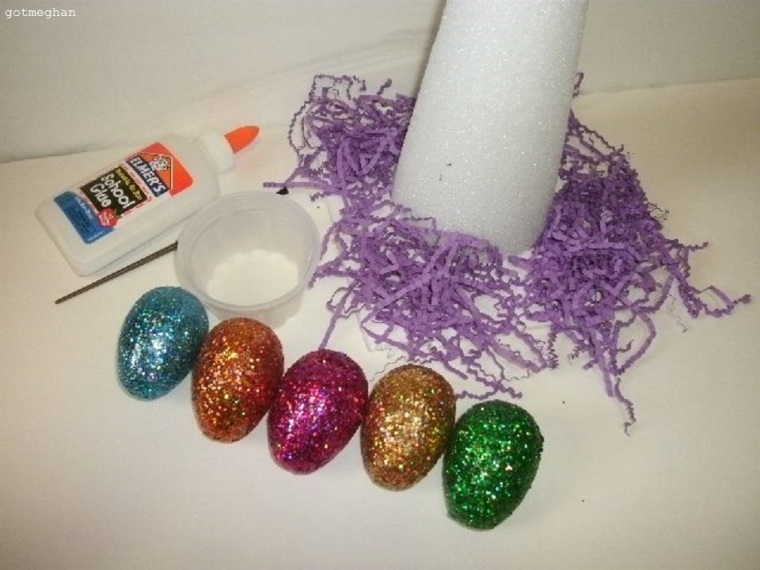 The first thing will need to do is build your platform for your tree to stand on, at first we weren’t going to do this, but my nana started to think about how the eggs were supposed to stay up on the cone, so she cut out a small square from part of our smaller form boards that we don’t use as much anymore. My nana calculated that it is seven inches on both sides. Since our luck with tracing comes in handy, I had her hold the cone in the middle of the square and I traced around it so that we had a better idea of where to place the glue and eventually put the cone on top. 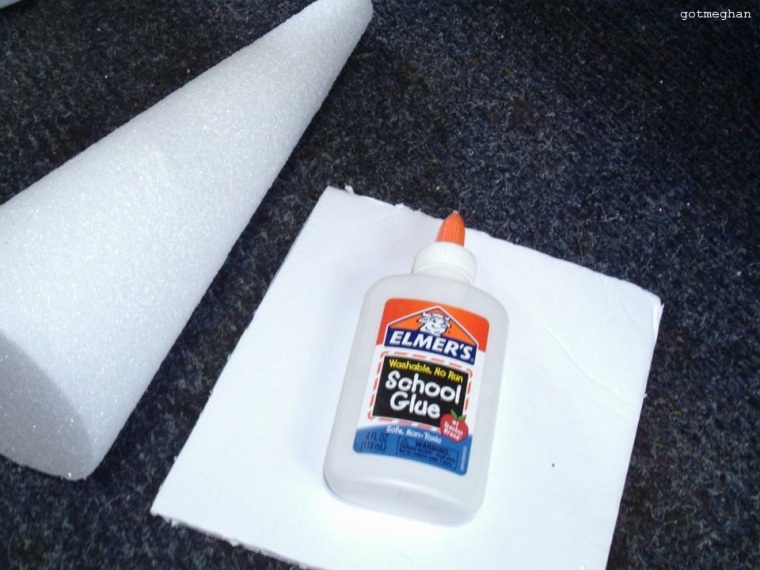 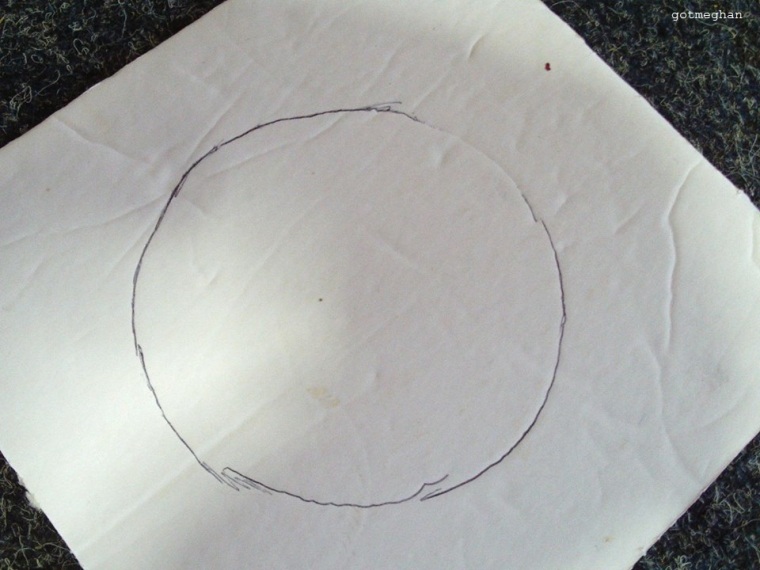 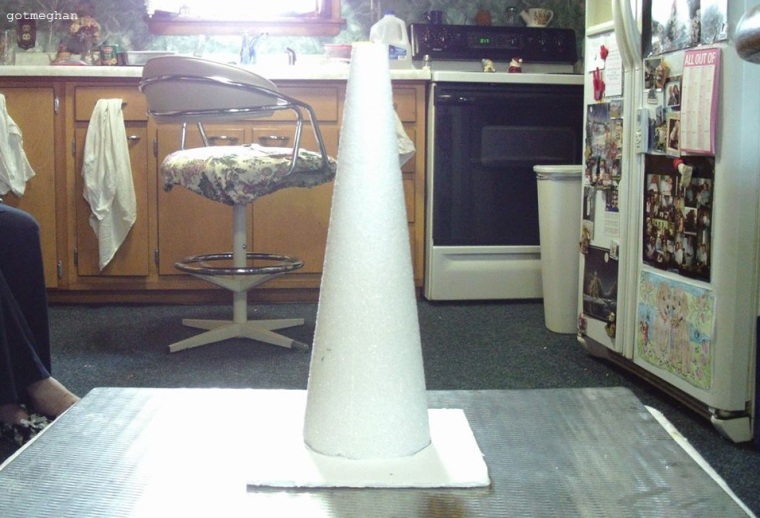 After that, we left it to dry.

Next we decided put the fake grass along the bottom of the cone. I chose purple grass (of course!) and we used what we had with the wreath; I put a couple of teaspoons of Elmer’s glue into a small cup and painted each corner at first with a bit of the glue, we then dropped a couple of balls of the grass and if I didn’t want to put my toes into the glue I borrowed a colored pencil and helped get them in place! 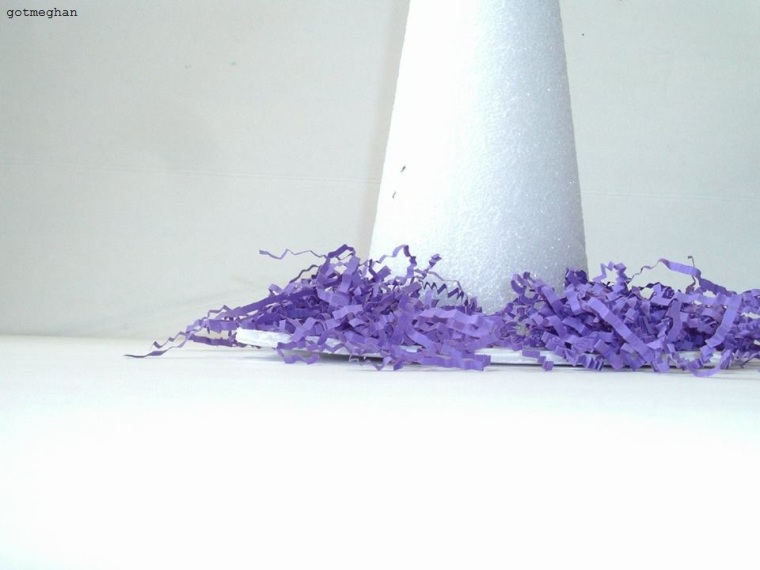 The next visit we attempted the egg part, which proved to be a disaster for us!

In the original directions it tells you to use regular glue, like Elmer’s and with every layer you flip the egg on its other side. So like we started placed them on the actual platform and grass, this wasn’t so bad for the first four eggs. By the time we got finished, several were coming loose and the ones that wanted to stay in their place, couldn’t I guess, I tried to place them together but a couple were a little too close to the point with any motion, they started falling down off the entire thing. It was very frustrating for us! We finally got everybody to agree after my nana kept gluing them back on. 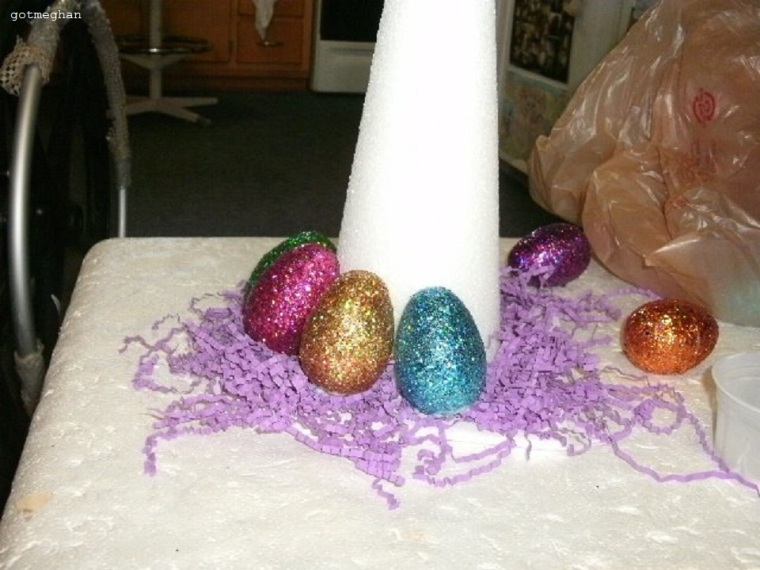 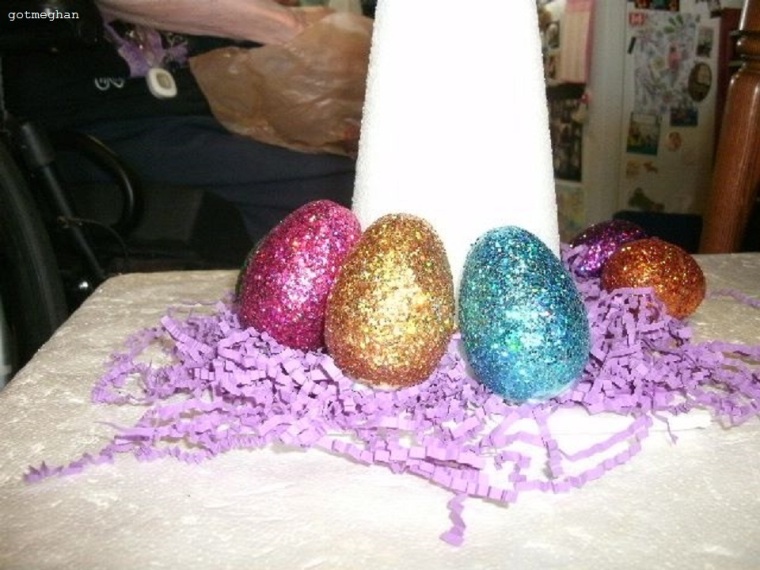 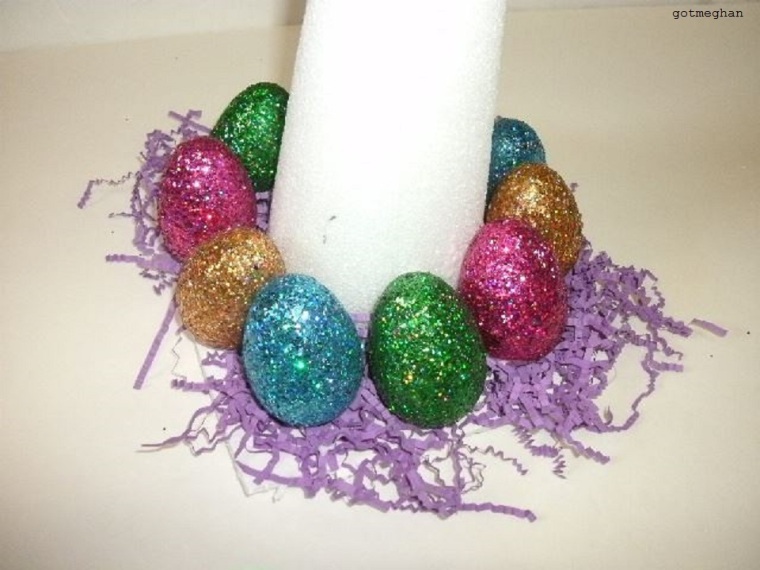 Some were place inward in the beginning like the pictures on the original, but then we just started laying them in front of the cone hoping that would be better, but it wasn’t. And then we moved onto the second level and it was the worst thing ever! Everything we did, the eggs would just fall. We put them in right, where the tips would be in the center of the bottom row. It was just the glue that wasn’t letting us move on to the next one. 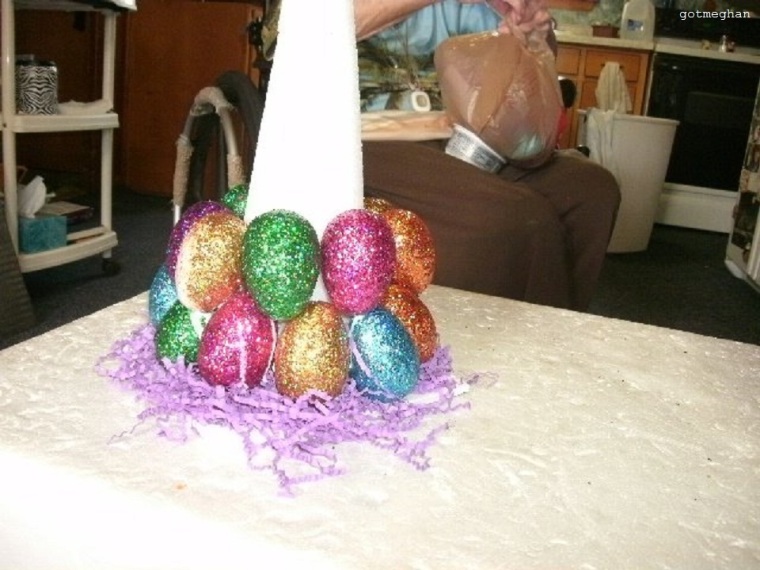 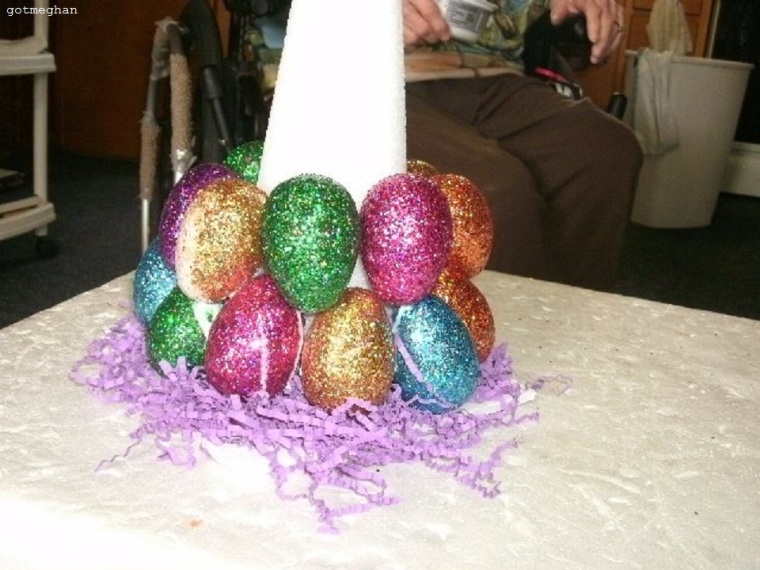 Unfortunately, my nana and I were not the ones who finished it. When my nana was in the hospital, she had Aunt Laurie and Uncle Mike finish both the tree and a wreath that she had done (the eggs were falling off on that as well!) so I don’t know much of what they did, but it kind of looks like everything is in the same sequence. I was told that they had used the hot glue gun to finish both projects so hopefully now we won’t have any little strays anymore!

The only thing we might have to is put the grass in the blank spots and then it will officially be done. I still don’t know where I would put it, but I’ll find a place for it somewhere in my room! 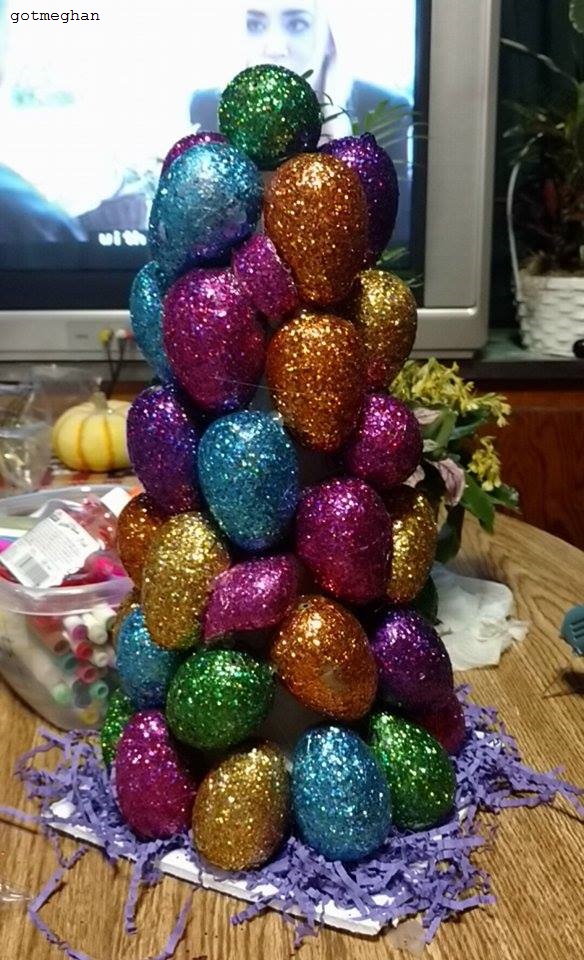 Have you been doing any new crafts lately?