So I have another interesting post for you! And yes, I had a lot of fun creating this little masterpiece!

My parents like to make our front porch very festive in the following seasons. They’ve put Christmas lights around the actual porch, flower pots on the edges, and even a bird feeder! My mom has these little spurts where she wants to make the house look really nice but with all of our cats that roam around the place, they tend to mark their territory and basically kill every living plant she puts out. The only thing that we can put outside that they don’t necessarily attack are the pumpkins and her Scarecrow that she has placed into the ground.

I want to say around 2014, when she bought the first Scarecrow that our cats basically killed, she bought my nana her own Scarecrow! Since neither one of my grandparents were able to get out on their own in the yard, my nana has a small section of cute array of statues. My mom figured that’s where she’d want it to be placed, but I don’t think it ever lasted a month outside for more than a month! 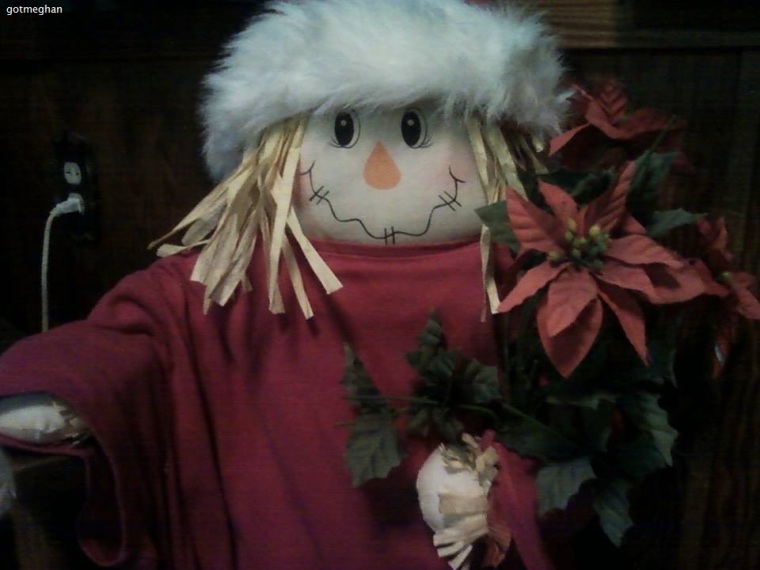 She’s has tons of creative ideas, it’s the whole thing of being able to do them that I feel is her problem. I know she misses having a yard where she can go out and plant different flowers, watering them every other afternoon, and just being able to sit outside to enjoy the nice weather! When both of my grandparent’s balances became an issue and they started using wheelchairs full-time, going out at all was nonsexist for them.

Now she has to get her creative juices out by using different resources. Luckily, she was already doing one long before she was in her wheelchair.

Remember I was talking about those statuses on her porch? At one point, she had these ceramic Geese, they had eyes and beautiful colors that your normal ducks would have, but the only difference was she used to make them little outfits. In the beginning they had little jackets made out of material she had left after making us grandkids blankets and then finally, when it was warmer outside she just made them hats that tied around the lower part of their beaks.

This Scarecrow like every other stuffed animal that I have owned, has a name, but it’s not just any name. This Scarecrow is transgender, so in the beginning when my mom dropped her off it was “Alexandra” somehow later it changed to “Alexander” and finally just “Alex” to make things easier for papaw to understand… My nana has given it a haircut and stripped it of some of its clothes and she exchanged them with dresses and holiday garments instead.

She even has a teddy bear that she decorated in full costume. He is her “Biker Bear” and this was inspired by my dad and motorcycle friends. This little bear has a leather vest, and I’m still confused whether or not they are in fact booties or if she wants them to be called “chaps.” To finish it off, she added a pink leopard print bandana around its ears! Like the geese above, this is another stuffed animal that just appeared naked and then she dressed it up a bit!

So she’s always had a knack for things like this, but when my mom gave her this Scarecrow that everything sort of changed, drastically!

For this Halloween, it has a full on Batman theme going! My Aunt Laurie and Uncle Mike found a small Batman costume as the store and dressed it up in it, it uses a black trash bag as it’s mask and it has–not kidding–these zip up baggies on its hands that literally have the Batman symbol on them! They really do go all out this time around!