Oh yes, we were going to talk about something really exciting! I also feel the need to apologize for the fact that I’ve left this go until the end of this month to tell you that we know the sex of my cousin’s little bun in the oven!

If anybody remembers I finally announced it on here back in the middle of June, is that right? In that post, I explained that I kept having dreams about her getting pregnant and having a baby boy. I had dreams from the start of March all the way until it was actually said on Facebook. First of all, I got up around eight in the morning overjoyed for the fact that today was the day everybody would know what it was. Half of my family was seriously divided, her dad – my uncle wanted a girl… really bad! I don’t know if it was because he thought it would be good payback to have her produce a mini Kristi I don’t know. The rest were all of the male side; of course, we didn’t really care as long as it was healthy!

I spent that day at my nana’s and it was the one time where I was perfectly fine that she was glued to her computer. My cousin was smart, she never really said when the appointment was, she only gave us the date of when we’d find out. So I spent a good amount of my day patiently waiting. I got home from my nana’s around 3pm and I decided I needed a break from sitting up, because my back was really hurting so I got offline for an hour. I wasn’t down for long though, because I kept having the urge to look on Facebook for any announcements. The one time where I needed a smartphone so I wouldn’t have to keep closing my laptop to go keep checking was at that moment! I kept having to fight myself the whole time before I gave in and there it was, her status… 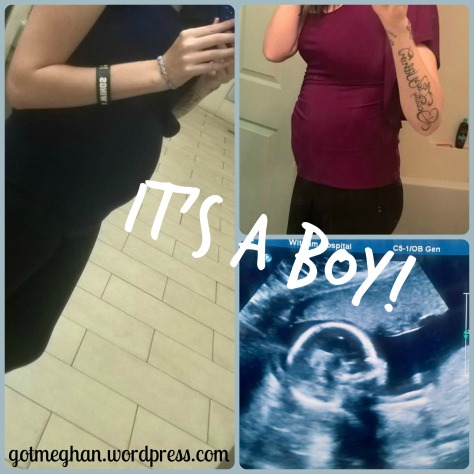 My dreams had come true! She would be having a little guy! Once my nana figured out it was a boy, she figured he needed a new nickname. It was “peanut” and for instances it still is, but now that we also know what his name will be, she’s given him the name “J.D.” or “Jelly Donut” this poor kid! Unfortunately, they are having a baby shower where she lives so I don’t think we will be able to make it. It doesn’t mean I can’t blog about it though. And if I get permission, I’ll reveal his name on that post, so be on the lookout for that in a couple of weeks!

Do we have any guesses? What would represent the “J” and “D” in the name? I’d like to see what you think it is!