So today’s post is sort of second or maybe a third part to my rock posts. I never meant for it for have so many squeals but okay!

If you haven’t read either post, here’s the story behind it. I “used” to be obsessed with rocks when I was a kid. I have my own little collection that has been at my nana’s in a small corner of the living room but since the beginning of 2014, it’s been in my room. That’s the start of it, if you want to read more that one then you can click here. Last December, my papaw went through his drawers or something like that and found one of his collections of rocks. It was my early Christmas present and I’ve been treasuring it since I got it! I wrote about that too, here’s that link if you want to check it out too!

I’ve had his rocks in an old Velveeta box and since it doesn’t have a lid to it, I’ve kept them right next to my bed so I know where it was at all times. However, having all these rocks in such a place sort of takes up space and I always feel like somebody’s going to dump them all out on the floor so I wanted a better place for them.

A few months ago, I want to say early January, my dad gave me his cigar box because he had smoked all of the cigars that came inside it and asked if I wanted it. I said sure, not knowing what to do with it because I had enough boxes to last me a while! Anyways, it’s been around the same corner where my rock collection has been since I brought home. I felt bad for taking it and not being able to find something to store inside it until I had an idea.

To hopefully clean up my area as best as I could, I decided to experiment and see if my papaw’s rocks could fit inside this box. As you can see below, the box isn’t that big but there’s enough space that all of the larger rocks can fit and to me, that was great!

Everytime I do one of these posts about the rocks, I never count to see how many I have! I have no idea how many my papaw had in his collections. One of these days, I’ll count them and update this post with the correct amount. Anyways, I like the style of this box. Even though my papaw has his own cigar boxes and they’re not made of the same material as these, but they’re part of the family’s trait of collecting any and everything!

I didn’t just put the rocks inside of it though. It holds something very special to my family now. We had my papaw’s funeral service the second to last week of April and my dad was given the bullets from the miliary guys that saluted him and he passed out a bullet to all of us. My little bullet is inside of this box because I figured these are my special things from my papaw. And last week, something that I was given from my nana that isn’t pictured is a lone bag of his favorite peppermints and his clip that he used to close them all the time. Nobody really knows I have them in my box until after they read this post of course!

To end this, I decided to title this post “The Treasure Box” because I had posted a status and a sneak peek of the box on my Facebook and one of the aides I was around in school said they make the perfect treasure boxes. So she inspired this post in a way! Thanks Becky!

Do you have a special place for keepsakes? 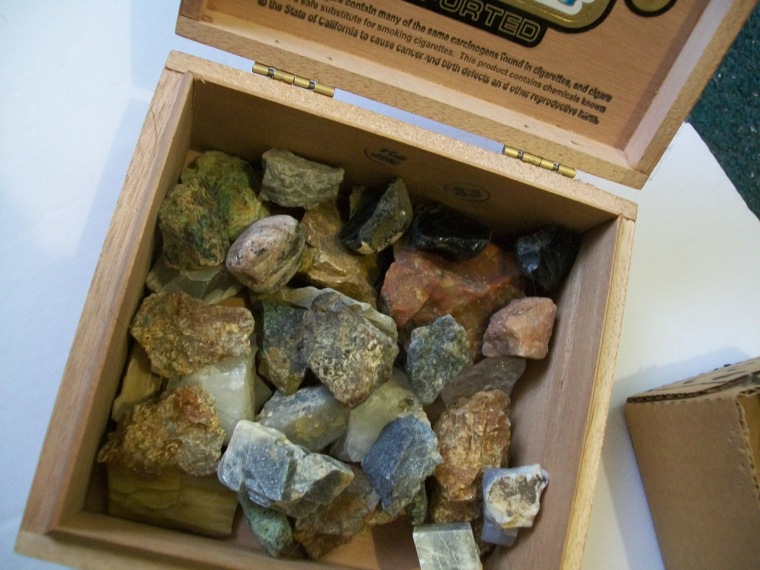 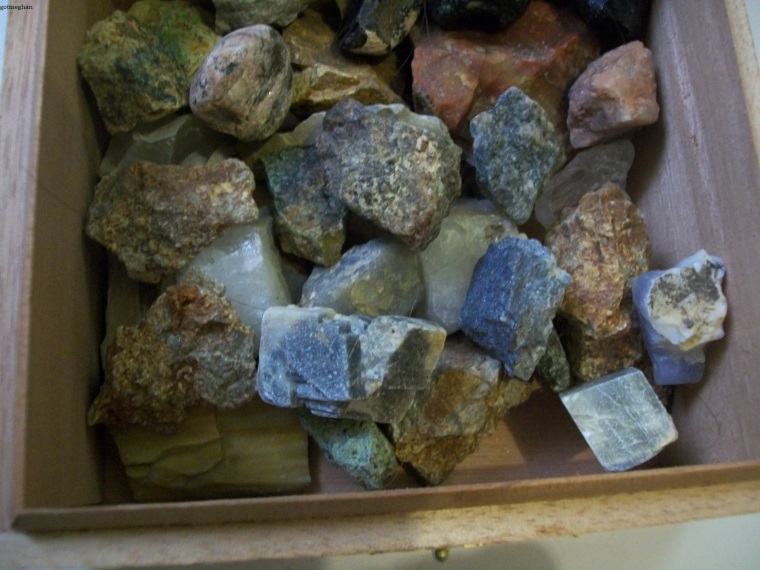 5 thoughts on “The Treasure Box!”