I seriously regretted not doing Blogmas last year and deciding to do it this year was totally a last minute thing! I figured a two post that was festive and Christmas-y would be better for everybody and I could have a whole theme for a few weeks before switching over to Best Of 2015 posts I need to get started on. God help me! The last time, I wanted to talk about my favorite Christmas films but I guess I ran out of time and I ultimately decided to leave it for this year. Somehow I managed to remember it, so this is what you’re getting today!

I wanted to share all of my favorite Christmas films, but sadly a lot of the gifts I was finding had different TM (trademark) symbols on them and so to keep myself away from using them, I am still going to share a few of my favorite special ones before going into the rest: This Christmas, A Charlie Brown Christmas, How The Grinch Stole Christmas, Christmas Comes But Once A Year, and  Rudolph the Red Nosed Reindeer.

Home Alone is one of those movies that I really enjoy seeing on my guide, but I hardly ever watch it. I found it playing on HBO early last week, I was literally so happy! I would watch it on TBS but I think the commercials just ruins the buzz of mood on movies. Even if you can skip ahead, it doesn’t help. I actually haven’t watched it since maybe early 00’s. It was still on VHS when I saw it last. Anyways, my mom and I have watched it. I literally laughed my butt off! I forgot how funny it was and I also remembered how I became so in love with choirs. You can blame this movie. I had this overwhelming feeling the same one I had years ago, while they were singing inside the church.

Fun fact: this movie used to scare the shit out of me! Between the spider and the Old Man Marley, it wasn’t one of my faves as a kid.

This is another movie that I don’t really watch whenever it’s on. TBS plays it all day long on Christmas day. When we wake up that early morning, my dad’s already got it on the living room TV. He’s thoroughly addicted to this movie. This is the only movie I didn’t grow up watching. I first saw this while I was in eighth grade, I was the only one who hadn’t seen it and I thought everybody was going to kill me for it.

So technically, this is like my #1 favorite movie, but on the Christmas part it’s #3 because the first two have to be the top dogs, not saying there’s something wrong with being in third place. This is just one movie that I don’t feel pressured to watch only around Christmas time. I grew up on this one: full shitters and all! I mean, you cannot deny this movie no matter how crazy it is! It’ll never get old for me.

I love the Santa Clause movies!! Seriously, as a child this was MY movie to watch over the holidays as everybody else’s was A Christmas Story. No offense to anybody out there, but it was! The first two films are literally the best! It took me years to finally watch the third. I do remember attempting to watch it in my speech class my eighth grade year, but we never got to finish it. Last year I actually made it my mission to finish it completely and I have to say, it wasn’t as good! For one thing, Bernard wasn’t on there and the dude that played Jack Frost was creepy!

5.) Barbie And The Nutcracker

This next one is going to freak a few people out. I don’t know it may not, but when I was like 13 years old, I was flipping through my TV on Christmas day and I found this movie. It was on Nickelodeon and I don’t know why I wanted to watch it, but I did. This is a film that a lot of people don’t know about because for one, I thought at the time I was too old to like Barbies. And two, to say you’re watching Barbie and The Nutcracker to your parents as a teenager, you’re happy as hell that nobody had a Facebook status back then and your ass would have been screwed! I do love it though, I think this was a movie that helped my love of ballet too! 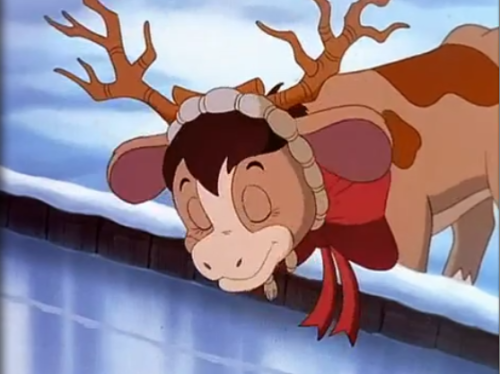 My sister and I loved this movie so much! We watched it so many times it was unbelievable! I still love it that’s the crazy part. I think I actually found it on YouTube last year and watched it. I was feeling so many things while I was watching it that I think I could have cried! The story of this little cow wanting to be a reindeer kind of reminds me of my childhood of wanting to be like the girls in school. Thank god Santa never granted me that wish!

What is your favorite Christmas movie?