At the end of June, I had too much on my plate. There are times I wish there were more days during the week so I won’t have to rush around to schedule blog posts. I ended up having four posts go up that week, but it wasn’t ideal. That’s why I’ve decided to combine both this month and the last one into one post so I can stop feeling so guilty. Two months into this series and I couldn’t even get the third month up in time! 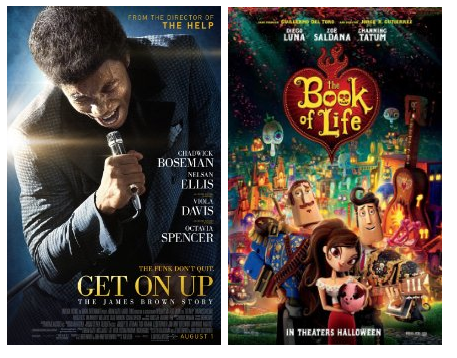 What I watched in June? In the beginning of the month, I was watching the movie The Phantom Of The Opera after worrying about it for almost a week because I thought the storms we were supposed to the night of was going to kick off the power and ruin my taping of the film on HBO. It didn’t thank god but while I was busy waiting for it to load to the actual movie, it advertise the upcoming movies it was going to play for the next three weekends: The Judge with Robert Downey Jr. Get On Up with Chadwick Boseman, and Gone Girl with Ben Affeleck and Rosemund Pike. I managed to record all of them but only watch two of them.

I watched Gone Girl back in January with my mother and sister, but we never got to finish it because the beginning of it was SO boring! When I saw the advertisement for it, I was actually excited to watch it but probably because I was going to stay in my room to watch it. After I recorded it, my mom was the first to watch it and then I did. It was very twisted but amazing! I thought it would be like those Lifetime movies that were mild and this was not mild in any way shape or form. I’m very glad that I chose to watch this by myself because towards the ending, I wouldn’t be able to look at anybody in that room for a while! My mom read the book, I didn’t and when we didn’t finish it the first time I had her tell me the ending because I didn’t think I’d ever see it again and it still surprised me!

The other things I recorded on my DVR were ATL, Honey, and Brown Sugar! I’ve always loved all three movies and if I remember correctly I watched them all for the first time in 2008. I also got Harry Potter and The Order Of The Phoenix too! Now all I need is Half-Blood Prince and Deathly Hollows Part 1 and I’d have all of the Harry Potter movies! The only shows that came back to me were Ink Master, Wild n’ Out, Mistresses, and Mysteries At The Monument. The two new ones that I’ve added to my daily schedule are Ballers on Sundays and The Astronauts’ Wives Club on Thursday’s! I love both of them too!

The first movie I recorded for the month of July was called The Book Of Life and it’s got a cute “Day Of The Dead” vibe but has a weird cast. If you’re going to use a Hispanic story I think you should have the whole cast have some sort of mexican heritage. So in other words, I didn’t like Channing Tatum playing Jaquin. Now Zoe Saldana and Ron Perlman, I was perfectly fine with! It’s a cute little movie! Keeping it in the kid’s section I guess! We had a free preview weekend of Showtime and they had some good movies playing, while looking through the guide I found the One Direction concert film. No joke either! It was like 11pm and I almost screamed because I was so happy! I wanted to get this as part of my Christmas gifts but I think my family remembers me through the Backstreet Boys days so I didn’t end up with it. This works though. It’s so nice on my HD TV too I’m not going to lie!

After I graduated from high school five years ago, I was wondering if I’d still want to read books as much as I did in school. I loved reading once I was basically forced out of the animals and cookbooks I had read all throughout Elementary and middle schools, but once I started freshman year, I became a bit of a bookworm and I thought I would just stop reading altogether. The first book I got after I was out, was Richelle Mead’s “Vampire Academy” and it was a thick book about vampires and it wasn’t made into a TV show or film at that point. I started it, but I guess life got in the way because I never finished it but the better news was I still loved to read books outside of school! Recently, during the free preview days I found the movie playing and I decided to record it. I don’t want to watch it before finishing it, but I still have no idea where the book is so it might be in my DVR a bit before I can ask my mom if I can purchase it onto my Kindle.

Something that I’ve been looking forward since mid-June was the premiere of Tut on Spike. I thought it was very strange to have something like this appearing on a channel that is more focused around their male audience. However, it had blood, war, and sex in it so I guess it fits the bill! I enjoyed the three part miniseries. i recorded all three parts and managed to finish them in two days I think. I was a little addicted to say the least! It was good, but if you are really curious about what I thought of it, you can read my review here. The next movie I found was this cute, very hilarious–probably better than Guardians Of The Galaxy–and it was called Big Hero 6. Truth be told, it was a movie that I don’t think was even on my list to watch. I thought it was too kid-like, I need stop doing things like that because I’ll just watch it anyways! If you need something cute to watch for an hour or so, this is your movie. Trust me!

What I’ve Listened To:

If you noticed above with June, I didn’t include what I had listened to that whole month. I figured since I was combining both months into one place I didn’t want to bore you all even more. So I’m only including the month of July’s songs I’ve added to my Starred playlist.

I’m a late bloomer and just now starting to like Shinedown’s “Cut The Cord,” Little Mix’s “Black Magic,” Papa Roach’s “Gravity,” and “Should’ve Been Us,” by Tori Kelly. I found a new song that I liked at the first listen, “In Love With A Boy” by Kaya Stewart, very simple but wonderful! Demi Lovato’s new song took me a few days to get interested into it, it’s a good thing I didn’t do a review of it when it first came out. Blondie would have killed me after she came back from Hawaii!!

Laurel released a new song called “Blue Blood” and it is so good! Then there were releases like Afrojack, Audien, Janet Jackson, and Xandria that deserved their own reviews I thought! I really like Dimitri Vegas & Like Mike/Ummet Ozcan’s “The Hum” a lot now! Before my sister for her trip, she’s been insisting we listen to The Weeknd a lot more than just the song “Earned It” because our mom is still obsessed with the song! So she played both singles: “The Hills” which I loved probably because of the bass that you can clearly hear! And “Can’t Feel My Face” and that has become a favorite of our mom’s. It’s so weird on how that worked out! We rarely like the same thing!

In the middle of July, I was scrolling through my Facebook and found Jack U had posted a new live set on their YouTube channel. It took me three separate days to complete it! I kept getting tired and the WiFi was going crazy for two of those days! I’ve never been able to listen to EDM for a whole hour and I was hoping I’d be able to do it with this, but I was wrong! This next part can be apart of both segments too. I watched about the last hour of the Special Olympics World Games opening ceremony at like 11:30 on a Saturday night. My sleep’s been jacked up! I watched this and they were going through the “M” countries, it was strange for some countries to have maybe 8 athletes and there’s USA and Russia that had over 400 of them! It was so enlightening to see these people with both physical and mental disabilities in these countries like Egypt, Africa, etc I couldn’t stop crying! Anyways, I got to see some of the performances like Avril Lavigne, Cassadee Pope and then there came J Balvin and I’ve haven’t heard of him before. I used to listen to some raggaeton music a few years ago, the morning after I went on a hunt for the songs he performed and I found quite a lot of music to keep me busy for a while!

I am in between of excited for the new Bring Me The Horizon album. I mean, I’ve heard of a lot of people getting upset of the different direction of their sound. One person said it best: Bring Me The Horizon sounds like the new Linkin Park. Ouch! That’s a little insulting but completely true! I love LP and always will, but I still don’t know about the two songs that BMTH released recently: “Happy Song” and “Throne.” I am starting to like HS so I’m making progress! After a month I think, Spotify finally put up Icon For Hire’s new song called “Now You Know” and man, is it good!