For the past few weeks I’ve been very lazy and just bored out of my mind. When I was doing physically therapy twice a week, for thirteen weeks. I was very nervous at first because I didn’t think I would being around a bunch of elderly people. For the first two sessions, I was fine. I no longer had that worry and I was actually bringing my happy face everytime I went there and they seemed to enjoy me being around them. So before I finished my time there. I started remembering when I was about to start college and it was everything I wanted just wasn’t going to happen like I wanted. As I was doing my online classes, I was becoming very depressed. I never went to the doctor for it, because I don’t think anybody really understood why I was so upset. When something doesn’t work out the way you want it, and as quickly as you want it to, I can understand you can get very sad. For me, as a person who didn’t understand my parents worries about me living on campus and everything else. Two weeks before I was supposed to start my classes, things started turning around and I begin falling into this dark hole, if you will. I was there for probably four and a half months. Somehow I got out of it by December. The reason why I’m talking about it on here is because I’m afraid my body is getting me ready to send me down that dark hole again.

It has been two weeks and I miss the routine of it. So when I was sad about stopping therapy, I was more afraid of not finding something that would get me in some type of routine again. That’s what I liked about school, I had five days of getting up at 7am and coming home at 3pm and do it all over again. Yeah, it was tiring at times, but you don’t realize how much you need that after not having it. After stopping therapy, I was worried about how long it’ll take me to find something to get me into a routine again. I haven’t done my stretches either for two weeks either. I definitely saw that one coming too. Yeah, some of them are my fault, but my arms are not getting worked on. I can’t do my arm stretches on my own either. I’m just getting tired of waiting for something to come. They always say, if you want something, go get it. Well, explain to me how I’m supposed to get something when I don’t even know what I want? That’s my excuse for not going back to college. I feel like if I continue to go on like this, I may not get myself out of this depression. 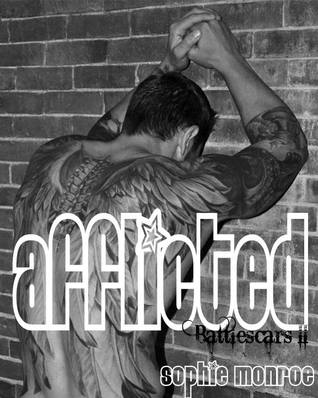 So I’ve finally done it! After taking a long, very long break from reading anything. I finally finished this book. It’s the second book of the Battlescars series. It is called “Afflicted” by Sophie Monroe. If you have read my first book review of the first book, you kind of know the background of the band and Aubrey. When I finished that book, I was very excited about Piper and Blake getting their romance on. The romance kind of starts on the last couple of chapters of the first book, especially at Aubrey and Jake’s wedding. So when I finally saw that this book was on that “free” list, I knew I had to get it to read about them. So let’s get started with my second review for this series.

When I read about the description of the book about Piper and her on and off again, ex Marine boyfriend Cole, I thought I was just going to enjoy it just for that, but nope. Hearing about the struggles that both Piper and Cole faced in their troubled relationship after he got back from being released from the military, he got hurt and began running off for days at a time without telling anyone where he went and thought nobody would care that he was gone. His whole story was just sad. He loves his girlfriend Piper, and she acts in the first book like a bad ass chick and doesn’t take much for her to go off. When you start this book, she still acts like that, but when things start to decay with Cole again, she turns into this very confused and sad person, who you would like to give a hug to, but she wouldn’t take your pity. Blake, well Blake is just a guy coming out of a sad relationship with his ex girlfriend Rowan. He thought they were ready to take the next step in their relationship and when he asks her to marry him, he doesn’t get the answer he wants and it just rips him up inside.

Obviously both Piper and Blake are two very hurt people on the inside, but so many things were telling them not to start a relationship. Piper sounds a bit like she shouldn’t care as much as she does. I don’t know it must be because she’s a tattoo artist, she’s supposed to be this rough girl that everybody loves to hate, but now that I think about Aubrey was more like than Piper. Blake cares very much for everyone that comes into his life. Whether it’s his band mates, his family (which they play a role in this too!) and of course Piper and his relationship with Cole. There’s a lot of crying in this book and I mean, a LOT of crying. I personally didn’t cry while reading it, because I didn’t feel the connection between Piper and Blake. I don’t know if it was because of Cole and Rowan being a major part of it or what, but everything I wanted to get out of this book, I didn’t really get it. However, I did like the plot, and the ending. I know it’s supposed to be about Blake and Piper, but hearing about Cole and Rowan from the beginning and not knowing what happens to them, was a bit of a disappointment.