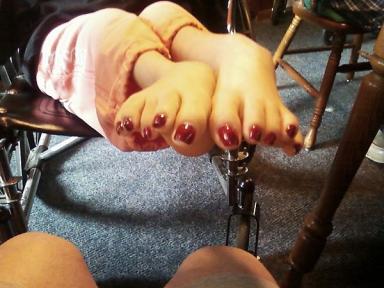 Hello! Did you miss me yesterday? I pretty much spent my whole day at my nana’s. Originally, it was only supposed to be lunch, and then by the time we were eating our lunch. My Uncle David called my nana on her cell phone saying he was coming down later on that afternoon. Ironically enough, nana was just talking about the fact that he would be coming down in two weeks. It’s still on in the air if he’ll actually come back for a visit in two weeks or not. Mom wasn’t feeling too good and poor Em had to work that afternoon. I know for a fact she wasn’t too happy about missing his visit again. This will be visit #3 she hasn’t been able to go to. Between work and soccer, she’s everywhere!

David called at probably 1pm and said he’d be there in about 2-3 hours. After we got done eating, I got the idea of painting my nails but I didn’t know where I wanted them done. At home, where who knows when I’d get done. Or at nana’s. Pulling her away from her laptop to do this was actually fun. She’s never done my nails before. All my nails were freshly trimmed by my mother. They were getting too long and my thumbnails were curving in. They get caught on my clothes when I lay down and roll. Anyways, nana had this skinny box of different nail polishes. She had at least three different red shades, one with sparkles. Those are the tricky polishes. The bottle might be a dark color but you wouldn’t your nails that dark with one coat. Found that out the hard way.

My finger nails have only one coat since they’re in a weird place. It’s hard for me and others to do things with my hands. My mom doesn’t like cutting my finger nails for two reasons. The nails are known to be super hard to cut. The second is because limited movement in my hands in general. After nana added the second coat on my toes and it dried, I was starting to regret. The toes are darker and my fingers are bright and cute. I don’t regret the color choice though. I love bold red. It makes a statement. I’m also done with dark and glittery nail colors too. After we were done, I somehow managed to go into the my nana’s office, without falling out of the wheelchair and wrecking my toe nails. I don’t have my nails to help me get around on the floor. It was really tricky but very fun to try to not fall out of the chair. We stayed in there until David and Kat got there and then I went into the kitchen.

I didn’t get home until 7:30pm and then relaxed until 9pm because it was a Monday, despite it being a holiday or not. It was Major Crimes and Ridiculousness day. I actually got up at 6am that morning to watch Backstreet Boys on GMA (they were going to reair the performance of “Everybody” since it didn’t get aired on Friday) well I watched it at 8:50am like they said it would be on, and it wasn’t. So I waited until 9:50am and still nothing. So much for trying to have a BSB day. I went to bed last night around 11pm. I was really tired and somehow I got up early again this morning. Around 9am, I felt like I could pass out. I still feel like I could. I’m not though, I’m going to push through the urges instead.